VIDEO: On the D6 the car ran in the opposite direction, causing a collision 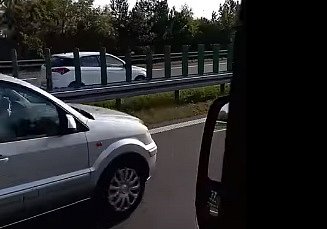 The traffic police inspectors from Kladno are looking for a driver who drove a white-colored passenger car on Sunday, August 19 on the D6 motorway on the Karlovy Vary – Prague route.

The driver in a white car drove along the D6 in the opposite direction.photo: YouTube / repro

As a result of this trip in the opposite direction there was a traffic accident of one hour on the twenty-kilometer long D6 motorway. The passenger car of the Škoda Octavia factory car, driving in the direction of Prague – Karlovy Vary, crashed.

The driver, in an attempt to prevent a collision with the vehicle on the other side, has made an evasive maneuver, touching the middle vehicles. "A crew of five members traveled in the car, one of the co-drivers was injured and the driver was asked to take a breath test that was negative, and the alcohol was immediately removed at the scene of a traffic accident and the damage caused was provisionally estimated at 130,000 crowns, "she said. Jana Šteinerová, the police spokesman.

Kladno police officials urged other drivers and road users on the D6 motorway at the time and were able to show any evidence of an off-road vehicle, including camcorder recordings from the camera, to the Dopravní inspektorát Kladno or call the service phone 702 207 630 or line 158.