Work on D1 near Prague is over, 104 km is closed at night 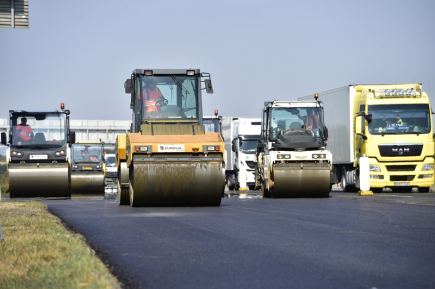 Říčany (near Prague) – The D1 motorway near Prague near Říčany between the 12th and 16th kilometers is accessible today without restrictions. Further work will follow next year. In Vetrny Jeníkov is closed several times on Sunday evening D1. The builders will install 104 new kilometers of new overhangs in the spring. Several short-term closures were there tonight, the next will be between 23:00 and 5:00. ČTK said spokesperson for the Road and Motorway Directorate Jan Studecký and spokesman for the police.

The working period of 104 kilometers was chosen with regard to the supposed nighttime traffic on the motorway. "Because short-term closures will be announced, cars will remain on the highway, police patrols will be on site," said Dana Čírtková, spokesperson for the police in Vysočina. The original viaduct was pulled down on 7 April as part of the modernization of the motorway in the section Humpolec – Větrný Jeníkov. The D1 between Mirošovice and Kývalka was divided into 21 parts because of the reconstruction. Since 2013, repairs of nine of them have been completed. The part between Humpolec and Wind Jeníkov is the longest part of the reconstructed parts D1.

The repair of the D1 motorway between the 12th and 16th kilometers, which started in June, will be completed in both directions. Unlimited operation came back here Friday night, said CTK Central Bohemia police spokesman Michael Richter. "In the spring of next year, the repair between twelve and nine kilometers will continue in the direction of Prague," Studecký said.

With the end of the summer holidays, more traffic is expected during the day, so on Sunday, RST will not do regular maintenance work that requires a reduction in lanes. Restrictions on maintenance work are valid from Sunday 8:00 am to 9:00 pm. However, it does not cover long-term closures and traffic accidents. Under constant watchfulness, the spokesman will have the towing service to intervene immediately in the event of a traffic accident.

The current traffic situation will be monitored by the National Transport Information Center, drivers can also use the website www.dopravniinfo.cz, where up-to-date traffic information is available non-stop. A free motorway service is also available for drivers at 800 280 281.