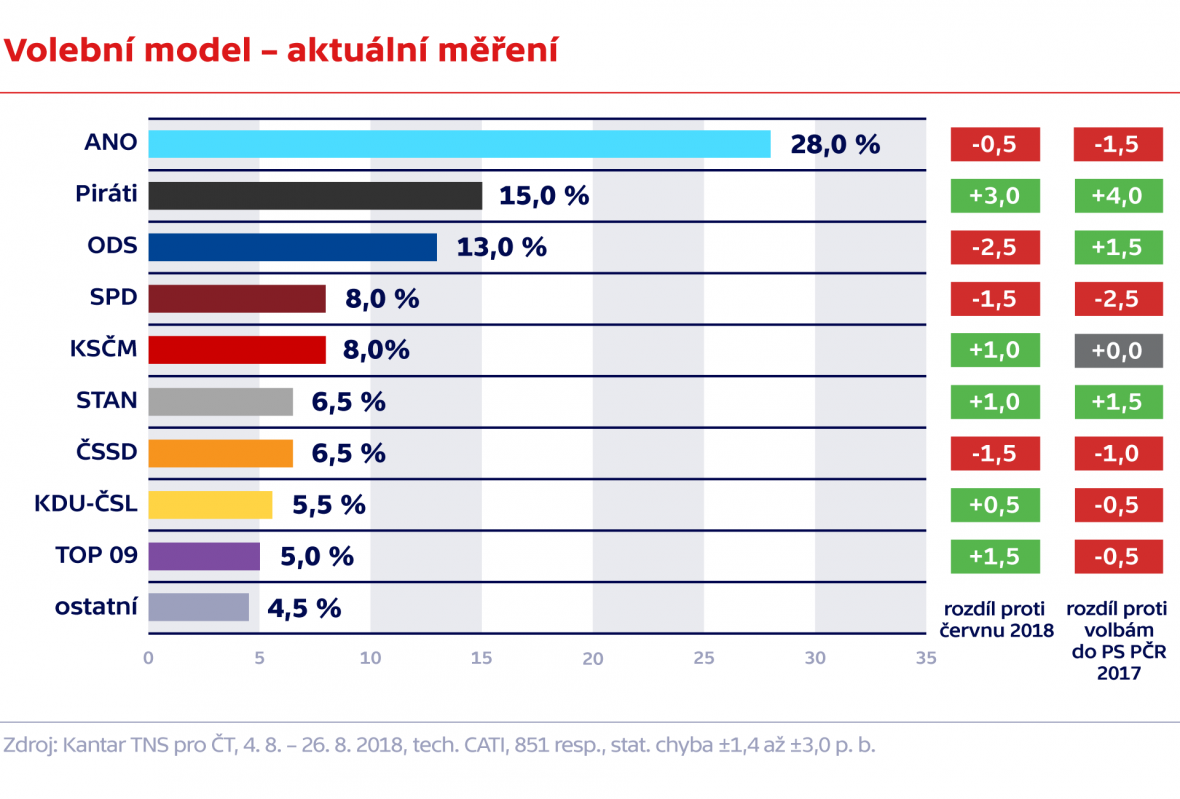 The election would now win the YO movement, which would get 28 percent, which is only a small difference compared to the last measurement. The movement's preference did not detract from the fact that in mid-July Prime Minister Andrei Babiš succeeded in gaining confidence in the Chamber of Deputies for the minority cabinet that he had established with the Social Democrats and was supported by the Communists, with which he a long period since the last October elections, when the parties did not agree with the government.

In the case of the Social Democrats, involvement with the government did not lead to an improvement in preferences. In the August model they reached 6.5 percent, which is no less than the June survey, but it is also lower than their actual autumn election result, which was the lowest since 1993.

The opposition parties are placed behind YO in other places. The ODS and the pirates are the second best. In August, the Pirates continued, rising to 15 percent, four percentage points higher than what they reached in the House. On the contrary, the citizens' democrats lost their votes and reached 13 percent in August.

"The biggest changes in the preferences against the June measurement are the strong reinforcement of the Czech Pirate Party and the fall in ODS, which we clearly attribute to the startup campaign before the city council elections, and we see no other support for the ODS for the drop in data, and we suspect that it is only a local fluctuation in data, "says analyst TNS Kantar Pavel Ranoch.

The fourth place is shared by SPD and KSČM by eight percent. Behind them is both CSSD and STAN with 6.5 percent. The population of the Czech Republic has 5.5 and the TOP 09 has been reduced to the limit of five cents. In the Chamber of Deputies, according to the latest model, the nine parties that are now active again.

Details about the stratification of support for individual parties are brought closer to socio-demographic indicators. YES increase, for example, increases considerably with age. While in the younger group of 18 to 29 years old, they have a support of 11.5 percent, while they are above the age of sixty percent 42 percent.

This is exactly the case with the Pirates. They usually receive support from young people under 30 (almost a third), while the oldest generation is six percent among minor variants. There is a larger percentage of KSČM voters among the elderly.