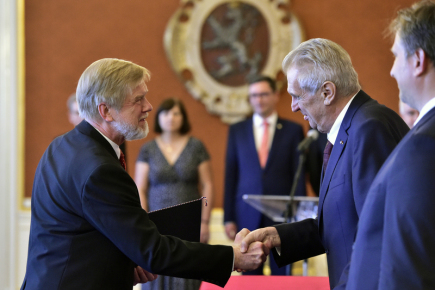 Prague – President Miloš Zeman appointed the chairman of the Supreme Administrative Court (NSS) of 68-year-old Michal Mazanka at the Prague Castle. The current vice-president of the institution will take office on 1 October. At the head of the highest administrative court, Mazanec replaces her first and only boss, Josef Bax, who ends his mandate this month.

"I had this appointment with many lawyers, and eventually Marie Benesova inspired me as a former Minister of Justice and a former High Representative, whom Dr. Mazan unequivocally recommended," Zeman said. Bax, who attended the ceremony together with Minister of Justice Jan Kněžínek, thanked the president for his work.

Zeman called on Mazan to keep his position unaffected by "various pseudo-ecological movements subject to bullying" and "to obstruct a number of useful traffic structures". "When I was in the Moravia-Silesia region, I was warned of the suspicion that these actions are essentially blackmailing, which means that if you promise a sponsorship principle, the action will be withdrawn, and I do not know if it is true, and quote the information I have received, "he said.

The president simultaneously mentioned three specific cases in which Mazan's decision was expressed by the NSS. He first called for the construction of a relay block to allow the Elbe to navigate to Pardubice. The court read that the blue sky butterfly made it impossible to invest the four billion kroner.

Zeman then recalled the suspension of the territorial plan of the South Moravia region. "Whenever I meet Austrian colleagues, I must rightfully criticize the way we do not have a motorway from Brno to Vienna," he said. He complained about the fact that the construction of a motorway to Slovakia was stopped in the Zlín region to protect the hamster. "Until now, I thought the field hamster was harmful, but I do not see it," he said.

The term of office of the president of the NSS is ten years, but Mazanec will manage the court for a maximum of more than three years. In 2021 he will reach the age of 70 when he ceases to function. Baxa has repeatedly spoken in his debates about his successors for candidates who can stay in office for ten years.

The newly appointed chairman wants to establish closer contacts with regional courts and their administrative justice departments, which in his eyes have been neglected in the past due to the increase in complaints about cassation and time constraints. He recently said that he also wants to focus on the legislative area – the NSS law requires a change in his opinion.

Mazanec, graduated from the University of Prague at Charles University, is one of the most respected experts in administrative law. He worked as a public prosecutor, he was a member of the Communist Party in the 1980s. After the Velvet Revolution, he served as Director of the Legal and Legislative Department of the Ministry of Culture. In 1992 he was appointed judge of the Supreme Court in administrative case law, a year later he became a judge at the Supreme Court in Prague. He was also a member of the Government Legislative Council.

Between 2000 and 2001 he participated in the reform of administrative case law, including the main lines of the code of administrative procedure. He was adept at running the newly established NSS, but in the end he was given priority by Bax and Mazanec became vice-chairman. He stayed in this position for 15 years.

Baxa will continue to act as a regular judge at the NSS. Barbara Pořízková becomes the new vice-president of the court. She has already met the president, the term for her appointment is not yet known.