Symptoms of heart attack in men and women. The difference between angina pectoris and a heart attack?

egypt December 4, 2020 egypt Comments Off on Symptoms of heart attack in men and women. The difference between angina pectoris and a heart attack? 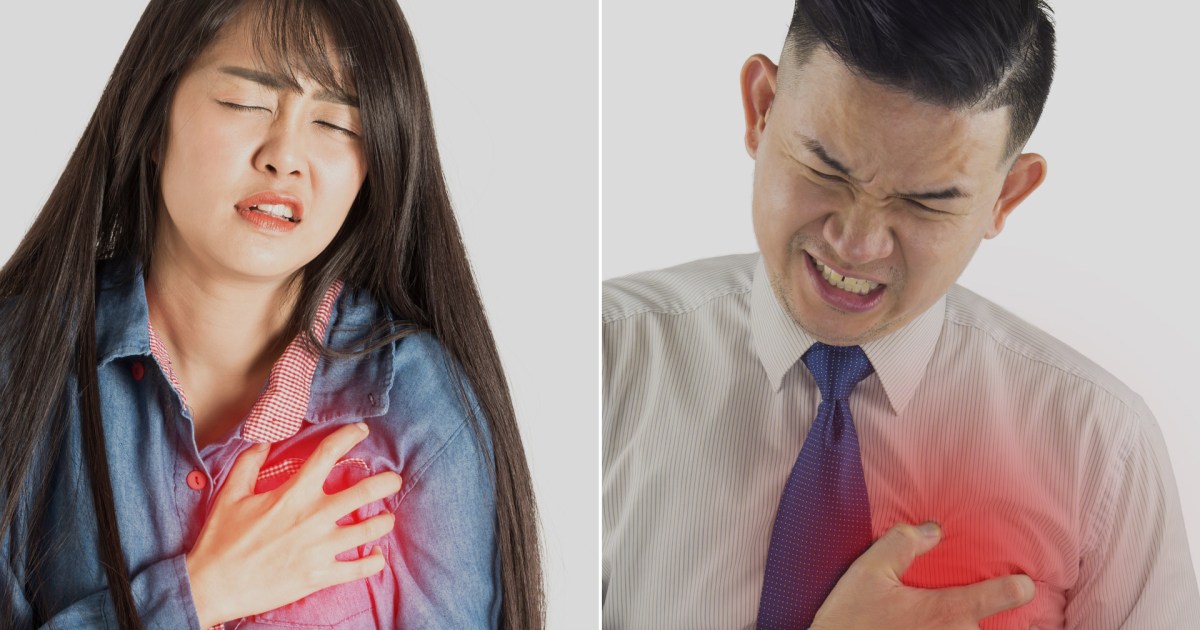 We start with a “heart attack,” where chest tightness, sweating, and pain in the shoulders and arms are the most common symptoms of a heart attack. But there are big differences in how men and women experience a heart attack.

Memorial Care provides warning symptoms for both men and women

Symptoms of heart attack in men

1- Pain or tightness in the chest that looks like something heavy lying on your chest.

2- A feeling of pressure in the chest that comes and goes or remains stationary.

3- Pain in the upper body in the arms, left shoulder, back, neck, jaw or abdomen.

8- Cold sweat, and it is known as sudden sweating, which is not the result of a person being in a hot climate or exercise.

Symptoms of a heart attack in women

7- Pain in the upper back or shoulder.

10- Pressure or pain in the center of the chest, which can spread to the arm.

It is noted that most women do not experience classic symptoms such as chest or arm pain, and many women experience symptoms of a heart attack more than a month before the attack occurs.

Nika Goldberg, medical director of the Joan H. And Langone Medical Center said in a statement to the American Heart Association that women may experience shortness of breath, pressure or pain in the lower chest or upper abdomen, dizziness or fainting, pressure in the upper back or extreme tiredness.

Goldberg added that a woman in a heart attack can be very short of breath, like running a marathon; But she never took any steps.

Why is the difference?

In men, a heart attack usually starts with a sudden rupture of “cholesterol-filled plaque” in the coronary artery in the heart. Which leads to a blood clot. Especially in younger women, the plaque in the vessel wall is more likely to erode than burst.

“Women are more likely to have smaller, non-fatal heart attacks,” says Dr. Nadita Scott, cardiologist and co-director of the Corrigan Women’s Heart Health Foundation, in a statement to Harvard.com.

“We see many women who suffer from classic” angina “(chest pain related to the heart), but their major coronary arteries look normal and they can have a heart attack if the condition is not treated,” adds Dr. Scott admits.

Postmenopausal women also experience a sudden and unusual change in the shape of the heart muscle, known as Takotsubo cardiomyopathy, that occurs in response to intense emotional stress. Also called “broken heart syndrome”, it is characterized by chest pain and changes in the electrical activity of the heart that mimic a heart attack, but at first, arteries appear devoid of cholesterol plaques (which cause the heart attack); But these women are still at risk of heart rhythm problems or even death.

In all cases, contact the emergency services directly if you are suffering from any of the symptoms of a heart attack, even if you suspect it.

What is a heart attack? What’s different from angina and cardiac arrest?

The heart attack, which we talked about about the differences in symptoms between men and women, is also known as “myocardial infarction” and “heart attack,” a condition that occurs when a clot (a mass of blood clot or blood clot) closes. Part of the coronary arteries, which supply the heart muscle with blood, and this interruption of the blood supply can lead to damage or death of the heart tissue from which the blood has been cut.

In a heart attack, death or permanent damage to the heart cells occurs as a result of inadequate oxygen supply. It’s a medical emergency and can be fatal if not treated early.

Angina pectoris is chest pain caused by insufficient blood supply to the heart muscle itself. With angina, there is no death or permanent damage to the heart cells, which is a risk factor for a heart attack.

One of the causes of angina pectoris is the presence of disease in the coronary arteries, or a blockage in the arteries, and one of the factors of infection from smoking, vigorous exercise and exposure to emotional pressure.

If you have angina pectoris, you should stop any activity and lie down in a comfortable position. If the person is on one of the angina pectoris medications, they will be taken, such as “nitroglycerin”.

Angina pectoris does not lead to death; But you should see a doctor to find out its causes and deal with it, because it indicates a problem that is impeding blood flow to the heart muscle, and not treating it can lead to a heart attack, an emergency that can lead to death. lead.

If a person is unsure whether they are having a heart attack or angina, they should call 911.

Cardiac arrest “Cardiac arrest”, in which the heart stops working, and the symptoms are the patient’s failure to strike the shoulder, not breathing normally, or breathing stops.

But before cardiac arrest, there can be warning signs, such as chest pain, shortness of breath, dizziness, and palpitations.