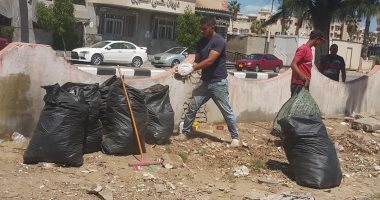 To receive Eid al-Adha, the districts of the Port Said government prepared a major campaign to remove the exploits and violations of state property and empty empty trash cans and remove all garbage.

Mansour Bakri, head of Al-Manakh District, followed the preparations for Eid Al-Adha, where he supervised the removal and disposal of waste. And remains in the old Arab region and Bam Al-Ameen Street.

Al-Sa & # 39; id Rakha, head of the Al-Dawahi district, oversaw a large-scale campaign to remove a number of streets and districts. The decision was taken to implement 62 decrees and remove state property. License and 7 patrons for the sale of cigarettes, meals and documents.

All the worries of cafeterias & stores that impede the traffic of pedestrians are lifted, the pavements are occupied and the evacuation of all street vendors and the work of the synagogues and the sanding and lifting of the sand and lifting of all meetings, Al – Suba Club of Egypt In the vicinity of the youth center of Al-Qabouti, in the context of the appearance of the neighborhoods of the province with the right appearance and the care of the executive power to the causes of complaints of to take away citizens.