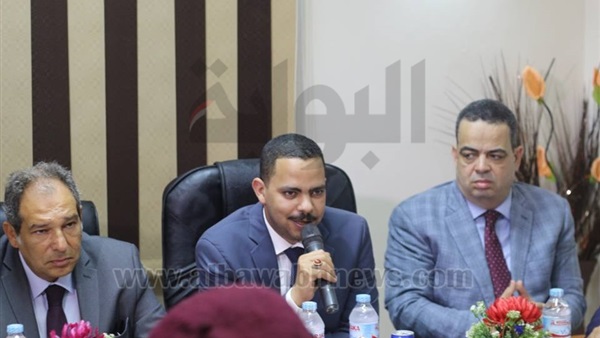 Ashraf Rashad, head of Future Party of the country, and Eng. Hossam Al-Kholy, secretary-general, opened the new headquarters of the party in Matruh, in the presence of Eng Saleh Sultan, secretary-general of the party in Matrouh and 35 deputies and leaders of the party.
The party leader met with the leadership of the party at the level of Matrouh governorate of the Office and secretaries of the secretariats and centers during a meeting in the conference room of the feast.
Ashraf Rashad said that the composition of the party in the province of Matrouh is a genius group that includes all leaders and represents the entire spectrum of the people in the province of Matrouh who will serve the community.
Rashad added: "In two years, Egypt will go through three major political events that will prepare the political map of the state, including the municipal elections, which will be announced immediately after the completion of the law.
He pointed out that the party works to serve the citizens and meet their needs, even if they are simple and solve the problems they encounter in cooperation between party leaders and members of parliament. The party will implement the initiative of your right, which includes 7 items and starts distributing meat to the most needy support of the party leaders. Education and training is a life academy.
He explained that the party completed the first and second level of the Czechs at the level of the Republic and in the third level the formation of Sheikhs and we have at the level of the headquarters of the Republic 27 in all provinces with a total of 240 branches, next to the two head offices in Cairo and the fifth assemblers.
Scary. Hossam Al-Kholy, Secretary General of the party, stressed the future of a country in its formations between experience, youth, organization and the material factor. He added: We must work collectively, which is embodied in the organization of the future party of the homeland with the participation of 4,200 teams at the level of the Republic at once, Who has moved our party machine with success rate more than 90% and regularly throughout the year will organize various events where all citizens are affected alongside the services they provide.
The head of the party and its leaders held a conference with the mayors and sheikhs of the tribes of the province and discussed many public issues in the Wadi al-Raml area in the city of Marsa Matruh for some of the people of the province. to meet.
For their part, the chieftains and sheikhs, leaders and dignitaries of Matruh Province welcomed the President of the Future Future Party and all accompanying leaders, emphasizing that they are supporters of the party and President Abdel Fattah al-Sisi, President of the Republic for development and counterterrorism. The state and they put their hands in the hands of the political leaders to always upgrade and promote Egypt in all sectors, saying: "We guard the gate of Western Egypt, and we will always protect them and our leaders. together with the armed forces and various security leaders. "
The delegation from the central secretariat started an external tour since Saturday which will tour 5 provinces this week, during which a number of the headquarters of the party will be opened in these provinces, yesterday the opening of the headquarters of the secretariat of Alexandria and today Matrouh, followed by the west and the lake and Giza.