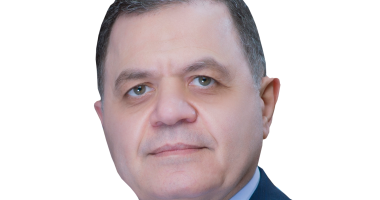 Minister of Internal Affairs General Mahmoud Tawfiq thanked the Cairo Security Directorate and his guidance for the efforts made to expedite the return of a money transfer vehicle after receiving the communication to the first part of Nasr City in less than 24 hours. The Minister praised the professionalism of the team in locating the car and the 9 accused, Determining the range of security directors of Cairo, Giza and Qalioubiya, once the places have been identified.

It was reported that the Nasr City Department for the first time found a car carrying money from a security company and the street-guarded department department Mohammed Tawfiq Diab, and within 19 moneybags "9 blank, 10 closed" and decided by a security officer and a technical company that they traveled in the car with driver Ehab. P. A 44-year-old resident of Sharabia, "with 40 bags of 24 million and £ 280,000 to feed a bank's ATMs." He waited for a car with a few people on board and fleeing .

Major General Mohamed Mansour, the director of Cairo's security, immediately set up a detective team that achieved its efforts to determine the number of the seven accused. The investigation team arrested five and accused them of committing the incident. .

In collaboration with the public security sector and the general administration of Giza Investigations, the fugitive driver was caught on the street of Ahmed Orabi, the department of the police station of Agouza, he carried a bag that was a financial amount of the confiscated person , guided by four travel bags with money from the confiscated apartment. Rented in the same street .

The efforts have also led to the coordination and general management of the Cairo investigation into the arrest of one of the fugitives. "Fawzi, unemployed, 41 years old, has criminal information and has been sentenced to 6 months' imprisonment in case of hitting and carrying a travel bag with money from the confiscated person and a Kia car, 200 thousand pounds of theft goes by .

In collaboration with the Criminal Investigation Department of the Qalioubiya Security Directorate, efforts resulted in the arrest of Mohammed Aa & el, 43, Saber, unemployed, 32 years old, and the first of the money stolen from the proceeds of the robbery, which helped the suspects to hide after the incident. .

The confiscation of seized funds in the Egyptian pound and the US dollar with the confiscated suspects show that they are close to "14 million pounds""He said.

And the necessary legal measures have been taken with regard to the incident and the presentation to the prosecutor who initiated the investigation, efforts are being intensified to control the escaped fugitive and the remaining amounts seized .