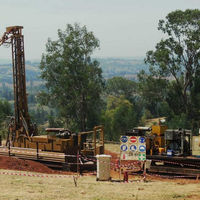 In the deal that was first announced in June, an investment vehicle Arabian Nubian Shield Resources was established to represent the syndicate of financial institutions and family offices, with no member holding more than 10% of the vehicle or any involvement at the gold mining company.

The agreement entitles ANS to subscribe to up to $ 35 million in new KEFI's Tulu Kapi Gold Mines Share Company (TKGM) shares, in the local currency alongside the Ethiopian government.

This will leave Kefi with a 54% share of Tulu Kapi, with 23% for both ANS and the Ethiopian government.

The first $ 9 million will be invested in September and is subject to KEFI for the completion of the remaining due diligence at Tulu Kapi and the execution of the binding share sharing agreement.

The balance of the $ 30-35 million must be invested towards the end of the year, although Kefi will close the entire project financing and receive the full approval of the Ethiopian government.

The funds will finance the closure costs of project financing from TKGM and the first phase of the resettlement of the Tulu Kapi community, as well as initial project expenditure.

The deals dictate that ANS 'ultimate total investment may not exceed the level that Kefi holds as majority shareholder of Tulu Kapi and that ANS may appoint two non-executive directors on the board of TKGM.

Kefi managing director Harry Anagnostaras-Adams said that ANS Resources is "carefully structured to provide diversified local equity participation in Ethiopia's first modern mining development", and this approach ensured a clear control by KEFI on the project, as required by the planned financiers of non-capital companies.

"Subsidy by both the Ethiopian government and ANS Resources to project project company TKGM implies a valuation of approximately $ 66 million for a remaining 54% KEFI holding company," he said.