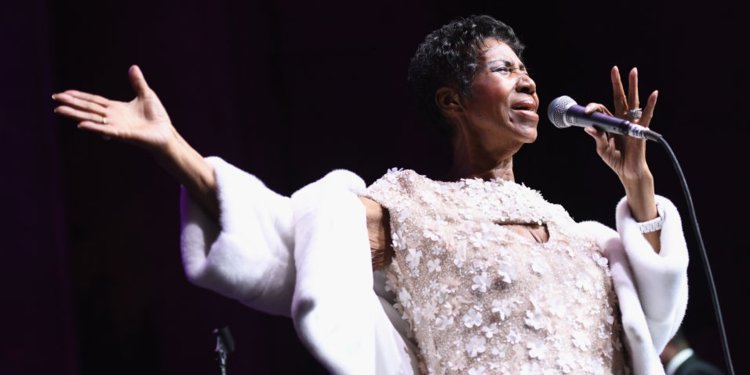 In 1980 I played bass guitar in a band of which the singer had an idol: Aretha Franklin.

In a one-room apartment in Neu-Isenburg we listened non-stop to the album "Aretha", which had just been released by Arista Records. "United Together" was our song. Nine nights we enjoyed the music, we listened to and analyzed every nuance and every unexpected turn in the new and old songs of this epochal singer.

When Aretha Franklin toured Germany, I really wanted to see her live. However, agreements, other obligations, a tight money situation – actually, the usual things – meant that I could not save it. I did not know at the time that after 1983 – the year of her last European tour – Aretha Franklin would never travel back to the continent because she was terrified of flying.

When I heard that, I realized that it is better to immediately do what is important to you if you get the chance.

The influence of Aretha Franklin has always been a red thread that makes my way through my musical life. Almost every time I liked a singer or a song, Aretha Franklin had left her traces. Most of my favorite Rhythm – & # 39; Blues and Soul singers learned their stuff from the great singer who was born in Memphis but spent her life in Detroit.

Her formative force was diverse. On the one hand, there was the underdog, a motherless child who grew up in extremely difficult circumstances and fought his way to the top with attitude.

Then there was the pride and inflexible will of the black artist who became a symbol of the civil rights movement, a symbol of Black Power.

And of course there was the champion of emancipation that gave the women's movement in 1967 one of their early hymns with its subversive adaptation of the song & # 39; Respect & # 39; from Otis Redding.

And there is no doubt that Detroit would look very different today without Aretha Franklin. It would still be nothing more than the withered remains of a car city that was plagued by early decay, instead of a biotope of black music that still thrives today. It is true that Aretha Franklin never worked for Berry Gordy's legendary Motown label.

The most famous artists from Motown – from Marvin Gaye to Diana Ross and to Michael Jackson – were strongly influenced by her. It is no coincidence that the Motown Museum deposited a condolence book when the news about her death broke out and played nothing but songs of the Queen of Soul all weekend.

Even Juan Atkins and Kevin Saunderson, the Detroit inventors of Techno, will come up with a song that their colleagues can play in the clubs of Berlin in honor of the Disco Diva.

Aretha Franklin, an authority figure for every musician, was and remains The Voice of Detroit. And above all, Aretha Franklin is The Voice. Her great impact as an artist is in the first place due to her style and technique as a singer.

Deeply rooted in Afro-American church music, in gospel and spiritual, she influenced enormously, you could say practically created, Soul and Rhythm – & # 39; -Bluessong, and thus also modern pop music like no affected.

Read more: 13 of Aretha Franklin's most inspiring quotes on music, respect and love

And when Aretha Franklin is described as the most successful singer in pop history, this is not the case. First, a reference to the statistics, although she released 131 singles, participated 88 times in the Billboard Charts and won 18 Grammy's. What is meant especially when we talk about her success is her influence as an artist.

In 1987 she was the first woman in the Rock and Roll Hall of Fame and in 2008 Rolling Stone placed her in the number 1 position among the 100 best singers of all time. There were of course great female singers for her, such as Mahalia Jackson, Ella Fitzgerald or Dinah Washington, who all formed the course of pop music.

But Aretha Franklin had the most students, one of the reasons was that she did not shy away from the popular and commercial, but was looking for a pastor who loves to preach when the church is full.

Anita Baker with her elegance and perfection. Patti LaBelle with her strength and volume (at the end of the 80s she sang in the Frankfurt conference center for tens of thousands without a microphone). Gladys Knight with her playfulness and soulful depth. Joyce Kennedy from Mother & # 39; s Finest with her sensual physicality. And Chaka Khan, her top notes almost opera-like when she reached the highest notes.

But, unlike her colleagues from the opera, her voice starts as sharp as a laser beam before it slowly unfolds with an increasing vibrato. The greatest master in this technique is the most successful and most talented student of Aretha Franklin, Whitney Houston. "I Will Always Love You" is unthinkable without Aretha Franklin – and at the same time the student almost surpasses her role model.

But the younger generation of Soul singers also owes a lot to Aretha Franklin. Amy Winehouse as much as the early Beyoncé (the later Beyoncé, who almost came across as an avatar on her recent German tour, lacks a comparison). Jill Scott as much as Erykah Badu. And even the generation younger than those, such as Dua Lipa, Joss Stone or Janelle Monaé, get inspiration from Aretha Franklin and reveal what they have in common – for example during the concert for President Barack Obama, where Monaé brought him out of his chair, but only Aretha. him in tears.

Why does Aretha Franklin touch us so much? Her life, her courage, her courage, her virtuosity? I believe it is the Maria Callas phenomenon. With Callas there is also a small bit of each of the above aspects. And above all, the feeling that we have that they give everything they have on every tone. An intensity and fragility that transfers every second – here is a voice that sings for its life.

There are two other artists whom I admire in the same way: Ella Fitzgerald and especially James Brown, the Godfather of Soul, Funk, Hip-Hop and modern dance music. Above all I wanted to see both live. I missed both chances for just as stupid reasons as I missed the Aretha Franklin concert. I really wanted it to be different with her, and would again and again get a chance to attend one of her rare concerts.

A year and a half ago I spoke to the director of the German Rolling Stone and WELT about Aretha. She mentioned the concert dates in Canada and New York. I have planned my trip together with a friend. But then a more important appointment got in the way and I had to cancel. It was her last concert.

When Aretha Franklin died, the director sent me a text message saying: "We really should always do everything immediately when the opportunity arises".

Mathias Döpfner is CEO of Axel Springer SE, to which Business Insider belongs.