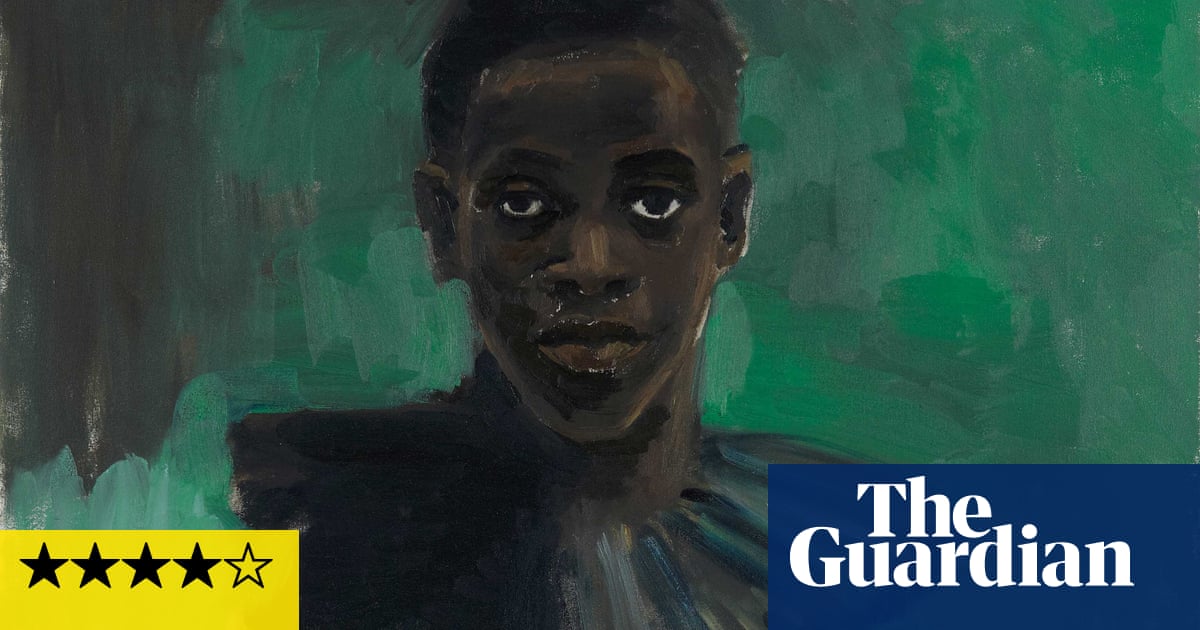 L.When I looked at Lynette Yiadom-Boakye’s painting No Such Luxury, I suddenly saw how much she had in common with the Belgian surrealist René Magritte. The work depicts a woman sitting at a table with a cup and saucer staring ahead. That seems simple, but the longer you look, the stranger it gets. Magritte portrayed himself in the same pose in his painting The Magician – except with four arms. The Yiadom-Boakye canvas seems, by comparison, a slice of real life. But it is strangely not to scale, a little bit bigger than life. The woman is a monument, her gaze mystical and prescient – a Buddha of suburbia.

Yet Yiadom-Boakye has a much deeper affinity with Magritte. She makes us believe in someone who doesn’t exist. Everything about her pictures of people says “portrait”. But these are not portraits. They are fictional creations, imaginary characters. “Ceci n’est pas une pipe,” Magritte wrote under a painting of a pipe. Yiadom-Boakye’s exhibition could simply have been called “This is not a portrait.”

Her paintings would look great on the covers of Penguin Modern Classics – you could have a blast trying them on with your favorite novels. Pale for the Rapture is a diptych – two canvases side by side – of elegantly dressed men in different but equally conventional poses of melancholy, both resting their faces on their hands as they sit cross-legged on benches, one of which is covered with one diamond pattern, the other in yellow and red stripes. A painting called In Lieu or Keen Virtue ‘portrays’ a bearded young man in a salmon sweater with a cat on his shoulder.

Perhaps these men aren’t so much characters in novels as novelists – they look like they’re taking a break from a morning of typing in a 1950s Greenwich Village cafe. Many of the people here could be novelists, poets, philosophers, because the real theme of Yiadom-Boakye seems to be the sensitivity itself, the nature of the inner life. Some of the most moving images are the simplest. To Tell Them Where It’s Got To depicts a woman turning away in the shadows, her head bowed with grief, lost in secrets.

This painting, like a number of others, has a deliberately nocturnal palette. Dark sweater, brown background, black hair and black skin. Yiadom-Boakye paints black people, and in the most sacred of traditional European art forms: oil on canvas. No acrylic paint for her, no collage; no photography or abstraction.

She’s turned Tate Britain upside down. In a normal year, the Turner Prize would currently unveil the latest video, photography, interactive art and, who knows, maybe a few paintings (Yiadom-Boakye was shortlisted, but didn’t win in 2012). It has been canceled due to the pandemic and here are room after room of oil paintings instead. It’s as if you took a wrong turn and ended up in the 18th century galleries. In addition to the black people who play only slavishly, those portraits now take secondary roles in the foreground and the high spiritual level that was once reserved for white faces in art.

Yiadom-Boakye clearly doesn’t dislike the great tradition of oil painting. She can’t do enough of it. Her approach may be post-modern, but it is steeped in painterly erudition. Because there is a long history of portraits that look like painted fictions, and she knows it: she distills that narrative quality while removing references to real people. The Ventricular depicts a man in a red shirt spreading his arms across a red sofa, vividly reminiscent of Degas’ intimate pastels while also being a crucifixion. The young man, standing in a strange medium of aquamarine blue, as if underwater, with a frilly collar like a clown in A Passion Like No Other, stares out with the intense solitude of the triste harlequin Gilles of the rococo artist Watteau , someone who is on the fearful border between theater and life.

Likewise caught in the flashlight is the young man in For the Sake of Angels, one of the most “real” paintings here – except it’s another fantasy. He was wearing a spotless white shirt and jacket, brightly lit by electric spotlights, and could be a model for a shoot. But unhappy in the role, he turns his face and casts a gloomy shadow on the wall as he suffers in the light. This too has its old masterful echoes – most notably how Velázquez captures the model’s grief in the Rokeby Venus, where a nude showing us her back reveals her misery in a mirror.

Light is bold, public. Shadows contain freedom and introspection. This show is a journey to strange, gloomy places of the imagination. Again and again Yiadom-Boakye portrays black faces in darkness. It is her deepest foray into the past of painting: into the realm of chiaroscuro, the melting luxury of shadows that reached its peak in the Dutch golden age, when Rembrandt and his students basked in nocturnal environments that intimate the soul.

One of the most sensitive of all Dutch 17th-century paintings, in the Wallace Collection in London, is by Rembrandt’s follower Govaert Flinck. Known as The Young Archer, it portrays a young African. Flinck focuses on his thoughtful, personal expression and turns him into a figure of soulfulness in chiaroscuro. But he is no more real than the people of Yiadom-Boakye. Dutch artists from the Golden Age often painted fictional characters. They were interested in the expressive potential of man, beyond any banal concept of “portraits”. There is even a name for this genre, the tronie.

So what Yiadom-Boakye does is paint tronies. Like Flinck, she reveals that a photo of someone can be so much more than the banal report of her, him, she – so much more than a selfie. These are paintings of states of being, states of the human soul. They don’t always work. Some group paintings seem dumb compared to the studies in solitude. But my God, what audacity to reclaim figurative oil painting, on such an astonishing scale, that Tate fills Britain with the kind of art, in terms of contemporary work, that it can usually go far to avoid. And serious painters who stick with it improve with age. So look forward to when she is a living old master. Although she already is in so many ways.