Berket Simon suspended from the ENM membership of the central committee

Amhara National Democratic Movement (ANDM) purified Bereket Simon and Tadesse Kassa from membership of the Central Committee, which is one of the most important decision-making bodies in the party. 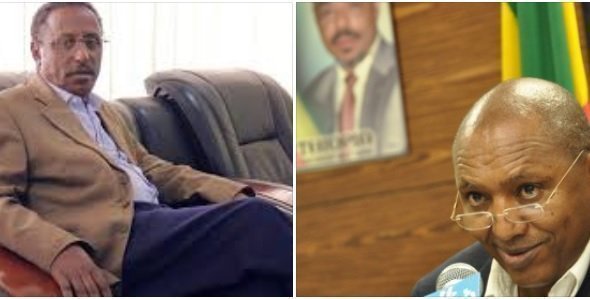 Amhara National Democratic Movement (ANDM) purified Berket Simon (pictured right) and Tadesse Kassa (pictured left) from Central Committee Membership.
As a result of an amendment to the existing party ordinance, the two most important members of ANDM's central committee will no longer be allowed to sit even during a central committee meeting of the party.

The practice before the change allows central committee members to attend a meeting for a long time, even if they have no voting rights.

Bereket Simon and Tadesse Kassa are suspended because the party is of the opinion that they do not stand for the interests of the ethnic Amhara or defend them. It is generally assumed that they are opposed to the ongoing reform and change in the country and allegedly work with forces that are interested in reversing change.

They are also involved in the TIRET scandals, a Charitable Endowment Corporate Organization & # 39; owned by the regional state Amhara.

However, the party does not seem to reveal exactly what the scandal was.

The central committee of the ANDM would have drawn up the agenda for the forthcoming party congress and is expected to make fundamental changes, including a new name change of the party and the modification, or at least amendment, of the revolutionary democracy & # 39. ; -athology, among others.

Bereket Simon, who was minister of the federal government and adviser to the late Meles Zenawi, is an exceptionally unpopular figure in the region and he is supposed to be a champion of the liberation front of Tigray People (Supremacy). He recently published a new book entitled "Ye Ethiopia Tinsae" which translates to The Renaissance.