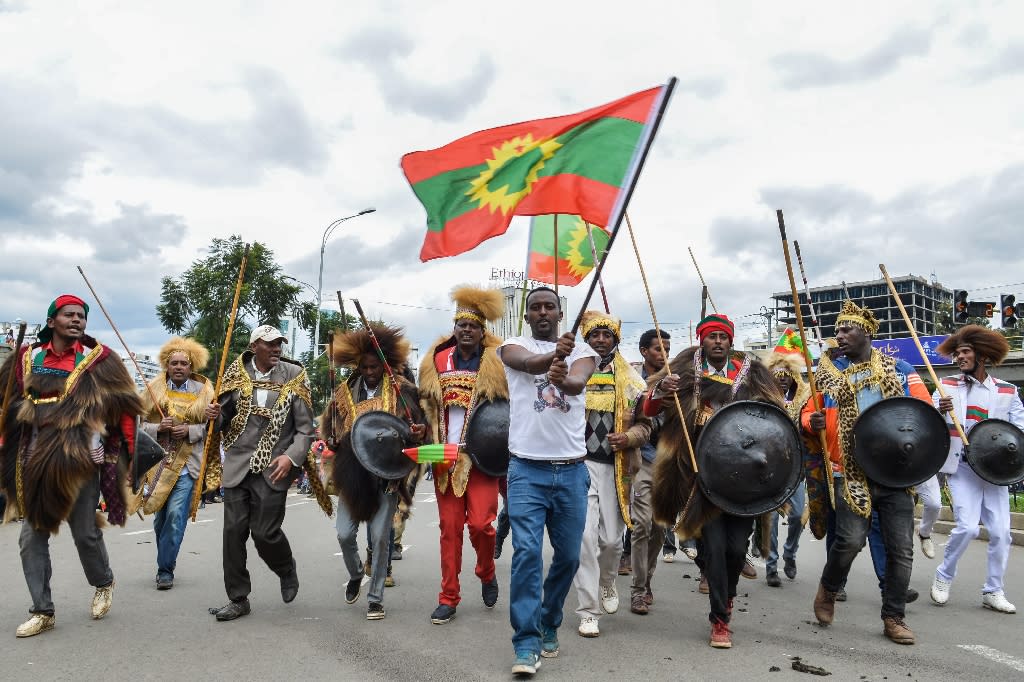 Addis Ababa (AFP) – Demonstrators flooded the Ethiopian capital Addis Ababa on Monday, blocked roads and closed businesses in an explosion of anger after the murder of 23 people on the outskirts of the city during the weekend.

The turmoil in the largest city of Ethiopia was the latest example of ethnic violence against Prime Minister Abiy Ahmed, who has taken aggressive reforms, including reigning in security forces since his inauguration in April.

The police seemed to spread because groups of mainly young men with protest flags and tree branches passed through neighborhoods to denounce the murder of the weekend in the Burayu suburb.

Police Chief of Ethiopia, Zeynu Jemal, said that officers had shot five people on Monday, and described them as "dangerous tramps" who tried to plunder property and steal police weapons.

"I came for justice because our brothers and sisters are being slaughtered and thrown into the forest," said Bizuayehu Biyargegne Getahun, one of a group of more than one hundred demonstrators gathered at the central Meskel Square.

Zewdu Tinae called on the government to prevent the violence that he said killed his brother and neighbor.

"The government says we should come together, but we are being driven apart because there is no legal order," he said.

The state-owned Ethiopia News Agency (ENA) said the violence in Burayu was carried out by an organized mob, which plundered, forced and forced 886 people from their homes, citing Alemayehu Ejigu, police commissioner for the Oromia region around Addis Ababa, and includes Burayu .

Local media reported up to 200 arrests.

On Twitter, Abiy's Chief of Staff, Fitsum Arega, said the leader "strongly condemns the killings and acts of violence against innocent civilians.

"These cowardly attacks are a major concern for the unity and solidarity of our people and will be answered with an appropriate response," he said.

But that was not enough for many protesters, who accuse the Oromos, Ethiopia & # 39; s largest ethnicity that Oromia inhabits, for targeting minorities.

"People from Gamo and people of other ethnic origin are being attacked," said Mahmud Emersa, referring to an ethnic minority group from South Ethiopia.

He claimed that the violence has continued over the past four years.

The roads to Burayu were blocked Monday by Protestants, who threatened journalists who were handling the demonstrations.

Companies closed their doors and the streets in the city were jammed with commuters waiting for public transport that had been greatly reduced by the unrest.

There were no direct reports of deaths or injuries during the demonstrations.

The weekend murder followed the triumphant return from the exile of leaders of the rebel group Oromo Liberation Front (OLF) who agreed with the Ethiopian government in August to lay down arms.

But in the days before their return, clashes broke out between young men from the ethnically mixed city of about four million people and Oromos who came to Addis Ababa to welcome the OLF.

Oromo-led protest actions against the government that started at the end of 2015 led to the resignation of the former Ethiopian leader and the subsequent seizure of power by Abiy.

An Oromo himself, Abiy has shaken the leadership of Ethiopia's police, military and intelligence weapons, which have long been accused of abusing human rights.

But while he has encouraged the people of the second most populous country in Africa to put their differences aside, bloody ethnic conflicts have shaken up his administration.

The most serious began shortly after his inauguration, when clashes between Oromos and members of the Gedeo ethnic drove nearly a million people.