Macron represents the challenges of a difficult start 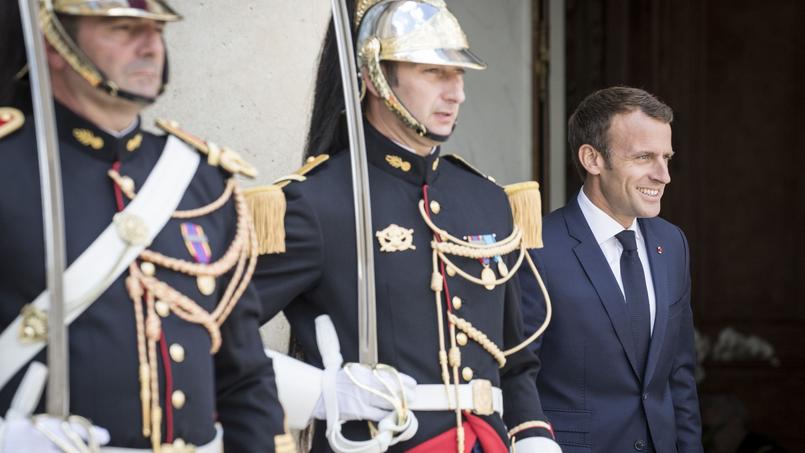 In order to turn the page of the Benalla case, the President of the Republic intends to maintain the pace of reform and to focus on social measures (poverty, health …), in an ever tighter budget.

It was time for the summer to finish. A period that Emmanuel Macron has become accustomed to fear. When he was a banker, he was suspicious of those weeks of anesthesia, where speculative attacks and unfriendly operations surprised the sleepy markets. It is still a summer, that of 2017, that the head of state faced his first test as president, with the resignation of the chief of staff, General Pierre de Villiers. And what about the vintage 2018? Between the Benalla affair, the controversy over the Brégançon swimming pool and warnings on the economic front – the inflation that starts again, the growth slower than expected … – the executing power experiences the worst sequence since the beginning of the five-year period year.

READ ALSO – At the time of Macron's return, the shadow of the Benalla affair still hangs over the Élysée

How to turn the page? How can it be shown that the reforms of the steamroller did not take place? This is the commitment of the first Council of Ministers after the holiday, this Wednesday. In this context, there is a budget meeting for arbitration, about which the executive power has more than communicated. The goal is clear: to show that the government is at work, as if nothing happened.

"Do not believe for a second that I intend to slow down or deviate," said Friday, the president during one of his last walkabouts, near Fort Brégançon. An original solidity while contrasts are requredées. Jean-Luc Mélenchon and Laurent Wauquiez will benefit this week from their political comeback to bring the iron into the wound. "The French want to keep reforming, calls on a counselor Matignon, and we will work in our own way, without taking into account the kicks of our opponents."

But what reform to revive the machine? The executive power hesitates between two major pieces: the Bruno Le Maire bill for business conduct, to return to the Macronism DNA, that of lifting the blockades of the French economy. Or continue with the revision of the institutional reform, which got bogged down at the Bourbon Palace, against a background of parliamentary obstruction at the time of the controversy over Alexandre Benalla. The government would show that he does not give in to the pressure. Rejecting this text again, however, would be seen as a setback. That is the dilemma that Elysee wants to arrange within two weeks.

READ ALSO – "The real risk for Macron is that of banalisation"

Coming in the aftermath of a series of social announcements. "It is not a turn, only an adjustment", recognizes a neighbor to the head of state. A bow that is supposed to defeat the criticism of the "right" president, rejected on the left. Emmanuel Macron always prefers silent changes instead of acts of repentance and self-criticism.

In September, the reform of the health system and the famous & # 39; poverty plan & # 39; revealed. At the same time, the Prime Minister will start the renegotiation of unemployment insurance with the social partners. Matignon is also again asked to come in front. Édouard Philippe will speak to clarify the budget choices made by the government at the time of the governmental seminar on return on 31 August. It is the return of the prime minister of the fuse. So far the messages addressed to public opinion.

Another part is played in the wings. "The head of state will tighten the bolts," said a member of his first circle. At the Élysée a reorganization of the internal organization is planned for the end of the year. A time that is justified internally by the need to reconsider the operation of a strong house of 800 people. "The Benalla affair has brought the well-known celebrities within the Elysee to the attention, with teams that do not love each other and do not talk to each other", says a parliamentarian because of macronia.

Finally, the head of state will multiply on the European stage. This time it is no longer about being defensive. The president is focusing on the European elections next May. The first election since his victory. A subject that is central to his project. Emmanuel Macron will visit Denmark and Finland at the end of August and Luxembourg. "He will become very involved in this area", says his follower. The president hopes to unite the European "progressives" against the "populists". He will soon meet German Chancellor Angela Merkel.

Symbolic side, the president thinks of a speech (interview or speech) on the occasion of the first anniversary of his solemn speech on Europe, pronounced on September 21 at the Sorbonne. History to take stock of the progress of the projects he had requested. For Emmanuel Macron, it is urgent to make progress to feed the balance that will defend his party in nine months.