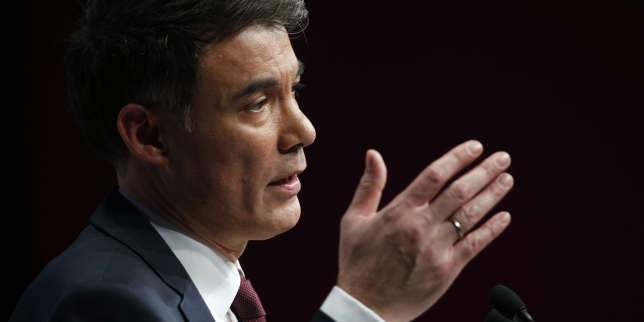 On the model of the no-confidence motion on the left, the leader of the socialists presents the "union of votes" on the issue of glyphosate, refugees and equality between men and women.

The image is symbolic. At the conclusion of the Summer University of the elected Socialist Party in La Rochelle from 23 to 25 August, Olivier Faure rolled up his sleeves. As if he wanted to show that he was more than ever determined to take on the many challenges that awaited him since he was elected leader of the Socialist Party at the Aubervilliers Congress on 8 April.

Almost an hour, in a half empty space, without splendor or music, the first secretary detailed his route map for the coming years and answered point by point to all the critics coming from his left wing – Emmanuel Maurel did not like to travel to the summer school by Jean-Luc Mélenchon – and his right wing with Dutchmen screaming "More politics" according to Stéphane Le Foll and, above all, less criticism of the former president of the republic.

Despite a slip of the tongue: "Francois Hollande wants to come back … become an activist of the Socialist Party again", the first secretary has changed his tone compared to the former head of state that he had qualified for Public Sénat in September of September 2009. "Champion of denial" to attract the anger of the Dutch. "François Hollande is the one who led us to victory in 2012 as an actor of our present: he plays an important role in the unveiling of the Macronist imposture" praises his former assistant cabinet director at Solferino, who promises the five-year inventory "Without blinkers and without caricature" will be returned in November.

The first secretary, often accused of not being "offensive" at the political level, took the lead this time by proposing the other political formations of the left. "Common fights". A smart way to go back to the center of the game and to be heard on the theme's preferred by competitors on the left.

The first secretary presented the question of the refugees, dear Benoît Hamon "To all elected representatives from the left a common commitment to the reception and guidance of refugees". While insubordinate France is studying the possibility of asking a committee of inquiry on glyphosate in the National Assembly, Mr. Faure remembers "Without acquiring glory" : "We were the first to ask for a committee of inquiry in the European Parliament". "Unite our voices and our forces to ask the government to suspend", he states to his potential political partners.

Following the model of the motion of censure common to the three left-wing groups on the Benalla affair, Mr Faure stresses the following: "What we did in July on the democratic issue, we must be able to reproduce on topics of general interest" in particular on the issue of gender equality.

The Member of Parliament for Seine-et-Marne has finally worked out his calendar for the European elections in May 2019: the project will be unveiled in October and the list will be published before December. "The French make jokes about who is on the list today" he evacuated after the suffering of the refusal of the Belgian Paul Magnette this summer to lead the battle.

The first secretary, who only spoke for some executives of his camp, such as the deputy Boris Vallaud or his number 2 Corinne Narrassiguin, mainly focused on the municipal elections of 2020 "Our first deadline" to make it the first demonstration of the "rebirth" of his party.

Realizing that the established socialist elected representatives will be very coveted, he announced the creation of one "Charter" "for our candidates and those who will seek our support". Exactly what Jean-Luc Mélenchon had proposed to the 2017 elections, he who has to work together in some cities.

It is in La Rochelle that the first secretary starts this campaign, at the summer universities of the party that will see the day next year. We will have to roll up our sleeves for the Europeans for that.


François Rebsamen: "The PS can disappear"