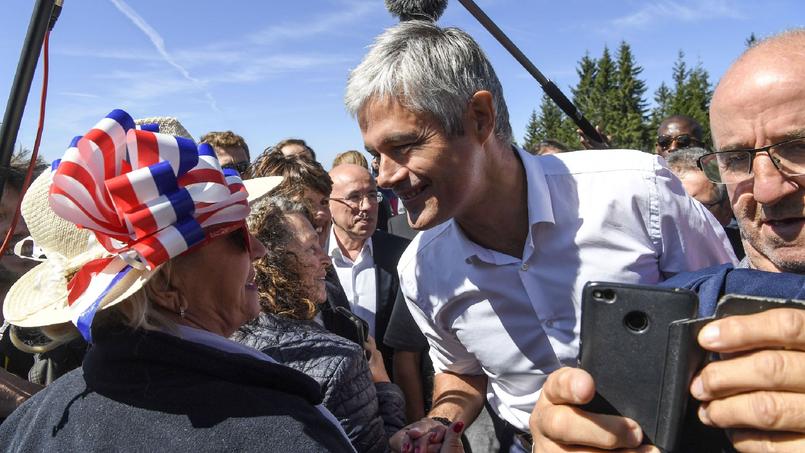 For his supporters gathered at the summit of Mont-Mézenc, the president Les Républicains made his return by accepting the charge against the economic and migration policy of Emmanuel Macron and proposing "another way".

Since 2012 it is his annual meeting place. Laurent Wauquiez was surrounded by Valérie Pécresse and Eric Ciotti and began the ascent of the 1750 meter Mont-Mézenc, at home in the Haute-Loire. Six years later Valérie Pécresse, who made her political comeback three days earlier in Corrèze, is no longer on the picture. The deputy of the Alpes-Maritimes Eric Ciotti is still there, according to the organizers, about forty members of parliament and more than 1500 activists.

Surrounded by the leadership of the Republicans almost complete, Laurent Wauquiez arrives in shirt sleeves with his family. He who for years said he did not want to expose his children, is now seemingly surrounded and his two teenagers, Baptiste and Louise, and his wife Charlotte, even on stage to sing the Marseillaise. His mother Eliane Wauquiez-Motte, mayor of Chambon-sur-Lignon, is also present, like every year.

"The masks have fallen"

But in this season the mood has changed considerably to the right. Although the popularity of the executive power has fallen sharply in recent months, especially in the LR voters, the speeches of elected officials are more offensive, those of more self-confident activists. "The temptations of disintegrating the Republicans that some fed failed, who would have thought that a year ago?" Says Eric Ciotti. "We feel the French are very disappointed with the policies of Emmanuel Maron, in the economic field that remains the first concern, in terms of immigration and after the affairs of this summer", clarifies the deputy secretary-general of AE, Fabien di Filippo. "The masks have fallen for a year," emphasizes the chairman of the LR group in the National Assembly, Christian Jacob. "What about the new world? It is a boat that has absorbed water from all sides," he says. As for the President of the Senate, Gerard Larcher, who wanted to support him Laurent Wauquiez … as Valerie Pécresse three days earlier. He calls on the Republicans to "present a varied project for our country that meets the expectations of our fellow citizens and the challenges our country must meet."

This is certainly the wish of Laurent Wauquiez. For his supporters, in a thirty-five-minute speech in which he quotes Tocqueville as Levinas, the president of LR intends to oppose Emmanuel Macron clearly. "I am deeply convinced that he is not facing any of these challenges," Laurent Wauquiez begins before explaining his comments. "Unfortunately, the French feel the decline, the disintegration and the expropriation of their country," he says. "Or to put it simply, the French refuse to become foreigners in their own country", he continues, to the applause of his supporters.

Torture what he had already revealed in his interview figaro (read our edition of 25 August), Laurent Wauquiez denounces "the illusions of macronism" and points to "failure" of this first year of five years. "This return is that of the Maciraean fata morgana," he emphasizes, pointing to the increase in taxes, the decline in purchasing power, the increase in government spending, the size of the debt and the decline in growth rate. "Who stifled economic activity? It is Emmanuel Macron who is responsible for having increased taxes," argues Laurent Wauquiez, supported by the chamber. "He created eight new taxes in one year," condemns the party boss. "This first year is a failure," says Laurent Wauquiez. "I say to Emmanuel Macron that it is more than time to return the money to the French, we have to give back the purchasing power to the French," he says.

Comparing Emmanuel Macron with the character of Tancrède who The Cheetah (The Lampedusa novel that Laurent Wauquiez reread at the beginning of the summer): "everything has to change so that nothing changes", the president of LR accuses the head of state of "doing and pretending to treat everything at the same time." " But in reality nothing changes and problems persist, "concludes the president of the Auvergne-Rhône-Alpes region.

In this context, Laurent Wauquiez intends to propose the French "in a different way". And especially with a view to "migratory pressure", he emphasizes that the issue of migrants is central to the national and European debate. When Laurent Wauquiez says he is "hit by these faces plowed by the test," he calls on the executive to not underestimate the questions of identity and security caused by these migration flows. # 39 ;. "The question that Europe is facing today is how migrants can be divided between countries, but the question for Europeans is how they can stop the flow of migrants," he says. loud applause from his supporters. Requiring to listen to the French and to hear their worries, Laurent Wauquiez argues for a "total review of European migration policy". "How not to see that behind individual cases the future of our country is at stake," he says. "How can we not understand that we are at the end of our integration capacities and that this massive immigration is today a cultural threat to European civilization?", He explains on the podium and underlines that he There is no "right of migrants" to settle anywhere in the world ".