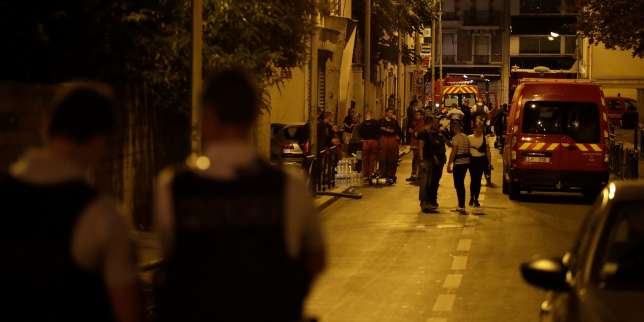 Several policemen were slightly more affected by this fire, which was checked around 7:30 PM on Sunday.

A fire in an apartment building caused seven serious injuries, including five children, Sunday, August 19 in Aubervilliers, less than a month after a disaster involving a mother was killed and to his three children in the same city of Seine-Saint-Denis.

Among these seven wounded are a particularly afflicted woman whose life was prognostically committed Sunday night, we learned from the brigade of Juicers-firefighters from Paris (BSPP). Another resident had a heart attack but was saved, according to the prefecture. Fifteen people were also slightly affected, including ten policemen who came to the area to try to evacuate the residents.

The fire broke out at around 7 o'clock in the attic of a two-story building and required the intervention of a hundred firefighters in this popular city of Seine-Saint-Denis, near Paris. The firefighters, assisted by about forty trucks, managed to get the flames under control at 7:30 pm and fully describe the incident around 9 o'clock in the evening, they said.

According to a police source, the residents of the house were through the windows to escape the flames and fumes and some have sought refuge on the roof. The causes of the fire were still undetermined and members of the scientific police were on site on Sunday evening to do the first measurements.

In a tweet, the Minister of Interior Gerard Collomb greeted "exemplary mobilization" fire department and police and sent his "first thoughts" to the wounded. Around 22.30 the large police force placed around the site of the incident was removed under the watchful eye of a few spectators.

This is the second major fire that affects Aubervilliers in less than a year. months. On 30 July, a fire on the 17th e floor of an HLM building in the city caused the death of a mother aged 33 and her three children aged 18 months to 6 years. Nine people were injured. The government paid tribute to the young people of the neighborhood who saved lives "to climb the floors to save the inhabitants."

"Aubervilliers once again hit by a serious fire", said the mayor (PCF) of the city, Meriem Derkaoui, in a tweet. "My thoughts go out to the victims and their families, municipal services are currently working to accompany the victims" she added.

Aubervilliers hit by a serious fire in a private house whose conditions of occupation remain … https://t.co/V1bAC0Scia

In the investigation into this previous drama, a 10-year-old child, suspected of having caused the incident by playing with a lighter and a cloth in the building, was indicted in Bobigny. Followed for voluntary fire resulting in death, however, he is not criminally responsible because of his age and he was forced to a degree of removal from the city.

Accused at age 10: what is the law for minors?