sit-in against an antimendity decree 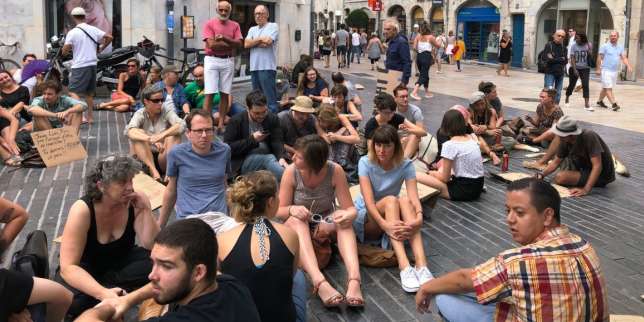 The mayor LRM of the city justifies this measure, challenged by associations and residents, by a revival of aggressive begging.

L summer, not to sit in the streets of Besançon: since 9 July, a municipal decree decided to forbid six days before "alcohol consumption, begging with or without animals, groups as well as sitting or lying down if it is an obstacle to the public traffic is ". This type of decree, said anti-begging, was regularly taken in other cities in the summer, including Nice, Montpellier, La Rochelle or La Roche-sur-Yon.

But this decision is not satisfied for all Bisontins. About 200 of them, according to The Republican East protested Saturday August 18 against this measure by participating in a sit-in, place Pasteur. "Tired of hunting the poor! We do not fight poverty and misery by laying it under the carpet" regrets Facebook on the collective that asked for this demonstration.

"Claims of the inhabitants"

Jean-Louis Fousseret, mayor LRM of the city, justifies this decision by "a very strong demand from the merchants, the inhabitants of the city center, the old people". In The Republican East regrets "the resurgence in certain streets, squares and public places of people who often beg aggressively …"

A position that Jacques Vuillemin does not share, former deputy mayor (PS) of the city, expressed his disagreement: "I remember that, faced with the same type of problem a few years ago, I had received homeless people at the Town Hall." We had discussed a solution I think it is preferable to take orders that ultimately do not regulate anything " he explains to France 3.

This decree, set up until 30 September from Monday to Saturday, from 10 to 20 hours, in effect for the Christmas holidays, between November 23 and December 31.