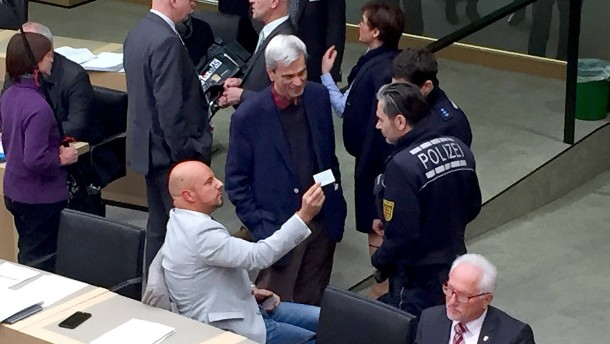 DThe national executive committee of the southwest AfD wants to exclude the MP Stefan Räpple from the party. A party exclusion investigation must be started for violations of the party policy and repeated party-damaging behavior, said a spokesperson for the National Association Wednesday.

Räpple has previously caused a commotion in parliament with his behavior. Because he did not want to leave the room despite the request from the Landtagspäsidiums, the meeting was interrupted on Wednesday. Räpple then had to be escorted out of the room by the police. The non-attached MP Wolfgang Gedeon was also referred to various interventions with the help of the police of the hall. Both are now excluded for various sessions of the Office.

The occasion was a debate on the initiative of the AfD about abortions and alleged "left-wing ideological influences & # 39; in kindergartens. Räpple had already received an official call from Landtag President Muhterem Aras (Greens) at the start of the debate. He had offended the SPD with & # 39; So they are, the red terrorists! & # 39; FDP party leader Hans-Ulrich Rülke said at the end of his speech, the "spiritual forerunners of people like Mr. Räpple & # 39 ;, & # 39; with a goose step through the Brandenburg Gate & # 39; Räpple insisted on calling Aras against Rülke. She did not follow, but told Räpple the possibility of a personal statement and called him to rest.

Räpple kept screaming and was finally put out of the hall. "They are leaving the session now," Aras shouted. "No, I'm staying here," he called back, demonstratively sitting on his chair. The session was interrupted. Only after three policemen had talked to Räpple for a few minutes did the Deputy Sheriff leave the hall. As a result, the whole AFD group stood up in protest and withdrew from the plenary session. Räpple later announced plans to file a constitutional complaint.

The debate was resumed shortly afterwards with the AfD faction, but without Räpple. Finally, the unregistered MP Wolfgang Gedeon was referred for interventions of the hall. He had received two orders from Aras and then called them so that they could lead a parliament in Anatolia, not in Germany. Aras shut Gedeon out of the meeting. He also refused to leave and was accompanied by the police from the hall.