germany December 5, 2020 germany Comments Off on Folding screen in the hybrid tablet laptop: Lenovo ThinkPad X1 Fold in the test 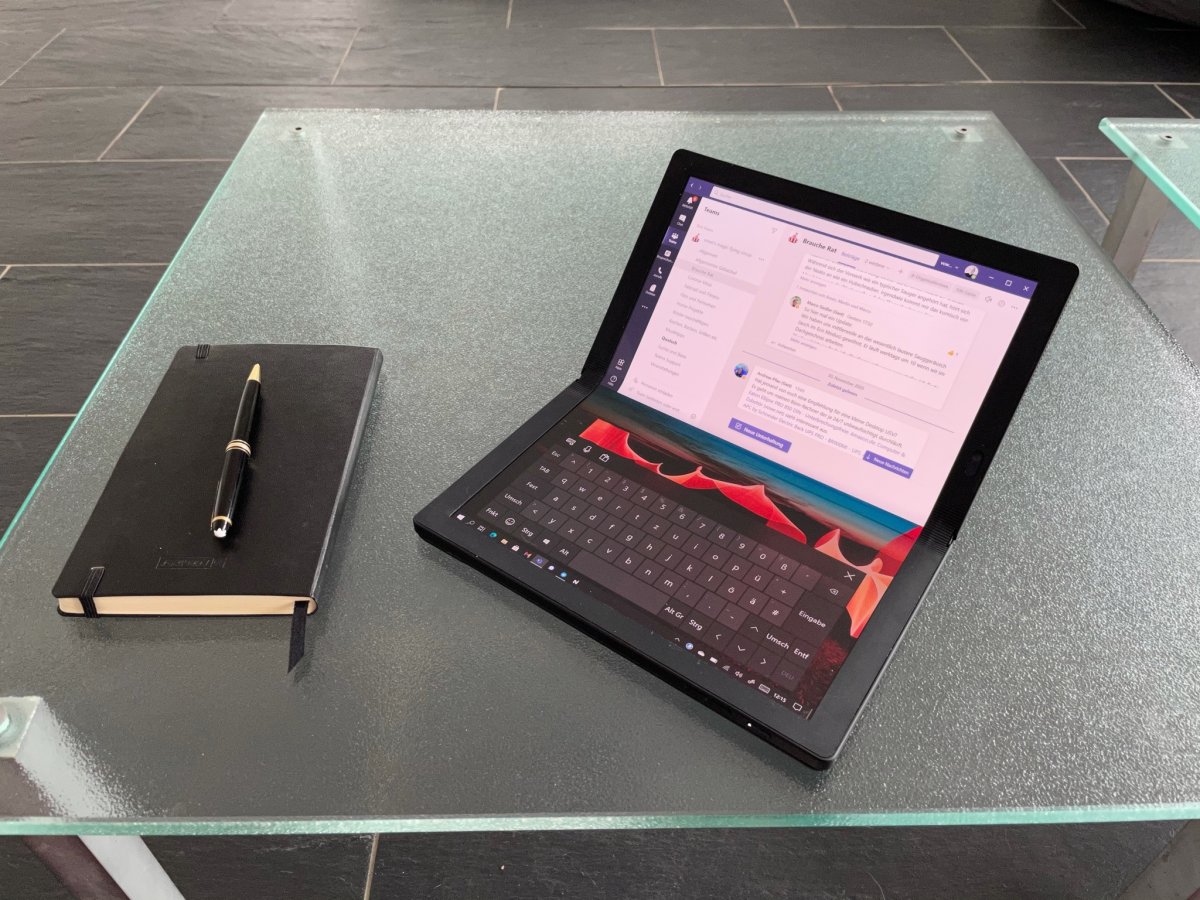 We are almost used to folding smartphones, Motorola has the Razr, Samsung the Galaxy Z Flip. We also know small, foldable tablets, such as the 7.3-inch Galaxy Z Fold 2 or the 8-inch Huawei Mate Xs. But now Lenovo is selling a hybrid laptop tablet with a 13.3 inch diagonal folding screen.

This display is the star of the ThinkPad X1 Fold. Lenovo put the product into series production for five years. Last year at Lenovo World in Munich, I was able to pick up one of the first two prototypes and was especially concerned not to break it under any circumstances. But now it is a real buyable product with warranty; Like the ThinkPad X1, Lenovo places it among the most extensively built, thinnest and lightest products in the business portfolio.

The construction is made possible by a hinge that folds out 180 degrees and stays firmly in place at any opening angle. Still, you don’t need a lot of force to move it. When closed, it bends the screen slightly to avoid creasing, and when opened, it stretches the last millimeters to pull it completely flat. Surprisingly, you don’t see any folds, at least not on such a new device. To find it, you have to tilt the switched-off display to the light so that a blind is reflected in it. They are invisible in normal use. The surface is not made of glass, but Lenovo does provide a pen with which you can draw or write on the display.

The fold is supplied flat as a tablet; once you take it out of the box, you will be surprised: such a large tablet with a wide, slightly raised edge feels sturdy, especially since it weighs almost a kilogram. That’s a lot for a tablet, but little for a notebook. When you switch it on for the first time, the screen immediately impresses with strong colors and deep black, as you would expect from OLED. The screen should only deliver 300 nits of brightness, it feels like more because the colors are so brilliant. In comparison, very good notebook screens have 500 nits, those with touch controls about 400.

The Fold can be used in four different positions: flat as a tablet, set up with the dog-ear in the leather cover as a display, slightly curved like a classic book or diagonally like a laptop. Lenovo includes a slim keyboard to which the pen can be securely attached in a loop. This keyboard fits into the folded device and is charged inductively there. When the keyboard is in place, magnets hold it in place and the software darkens the hidden part of the screen. The Windows taskbar slides into the center of the screen and you now have a very small, compact notebook that also fits on small tables on trains and airplanes.

As a large tablet, the ThinkPad X1 Fold is best used with a pen (Photo: Volker Weber)

You can feel at every corner how the designers had to overcome the various challenges of such a flexible device. In laptop mode, the array with the four microphones on the front left and the speaker sits above the screen, the camera is looking from the right, fairly close to the hinge, close to the table in poor perspective. Set up as a screen in landscape format, unlike, for example, the iPad Pro, the camera is now in the right place. The microphones are on the right and the speaker on the left. When you watch a movie, all the sound comes from the left. When you hold the tablet sideways, your left hand covers the speaker and the right hand covers part of the microphones.

The situation is similar to the two USB ports (USB-C 3.1 Gen 2). In landscape format, one is inaccessible at the bottom of the table top, the other on the narrow side, on the other hand, is perfect for a power cord or a cable to the dock that supplies power, Ethernet and transmits image signals. If you fold the tablet into a small notebook, the port that was just covered is perfectly positioned, and the one on the narrow side is suddenly at the top of the screen, where you don’t want to use it.

You can live with these design compromises, but the fun stops with the keyboard. The keys have a short but good touch and are large enough. As a result, the keyboard on the right suddenly becomes too narrow and the designers were missing the umlaut keys for the German adaptation. If you want to write a Ü, you have to write Fn-O, for Ö Fn-L and for Ä Fn- #. The key is divided by a hyphen and an underscore with a period and a colon. These tradeoffs make it impossible for me to type quickly on this unlit keyboard even after ten days. You can certainly learn that, but do you want to? I would rather send out angry tones and write down the umlauts like I do with any American keyboard.

Lenovo is in a bit of a rain when it comes to software, as Microsoft has postponed Windows 10X, which was actually announced for this year. That should support two screens on the Surface Neo and get by on few resources. Microsoft has also redesigned the start menu. Now the Neo has been delayed for the first time and Microsoft is once again trying to provide an alternative to the Chromebook with 10X, initially for classic notebooks with only one display.

Lenovo has to help itself with a mode switcher that tells the fold to look like a big screen or open programs on both sides. If you turn on the fold and have the keyboard on the surface, this switcher will not be loaded when logging in for the first time and the login screen will be partially covered. At this point you also notice that the infrared camera is not yet supported by Windows Hello.

These are all teething problems that Lenovo can work on. The ThinkPad X1 Fold is the first device of its kind, which can be tracked by others if the customer is interested. Lenovo puts the Fold through the same stress tests as all other ThinkPads and offers a three-year warranty. There is only one limitation: a defective fold is not repaired on site, but must be taken to the laboratory. This can be problematic for customers who don’t want to specify a hard drive. You can only get them in the lab.

Slim but not muscular

With an external keyboard and mouse, folding was a lot of fun in the test. The 50 Wh battery doesn’t keep the device alive for 11 hours as promised, but it still lasted a working day if you don’t open the screen too much. With OLED bright pixels consume a lot of electricity, black pixels on the other hand almost not at all. I estimate the realistic duration to be around 8 hours.

An Intel Core i5 sticker is printed on the magnesium case, but the i5-L16G7 is only a hybrid in Lakefield architecture with four energy-saving cores and one powerful. That’s enough for Office, browsing the web, and watching videos, but the fold becomes crippled with extensive graphics editing.

The device has 8 GB RAM and they are soldered as SoC together with the processor that consumes a maximum of 7 W as a package. There is no more RAM so that Lenovo does not have to build different devices. The Fold has a fan, but it rarely started in my test. The customer only has the choice between 256 and 512 GB SSD (M.2 2242, PCIe NVM 3.0 x 4). With a current system price of EUR 2,900 for a folding, keyboard and pen, you want to save hardly EUR 120 for the smaller plate. The optional 5G modem (Sub-6, CAT 20) was not on board with this test device. It should work with a SIM card, as well as an eSIM. Wi-Fi 6 (2×2 802.11ax) and Bluetooth 5.1 complete the equipment.

Connected to a 4k monitor via USB-C, the Fold immediately showed a desktop in full resolution, without having to open the screen. One press of the on switch is sufficient. The Fold can also be opened as a tablet and placed in front of the keyboard and works with two monitors, one of which can be operated with a pen or touch. According to Lenovo, the Fold can also operate two 4k monitors simultaneously.

Who’s going to buy this? The customer base is already limited by the price alone. The Fold is ideal if you are on the road a lot, because when folded it looks like a leather-bound book with its fixed cover. You can take it without a bag. When opened as a laptop, it fits on tables on planes and trains, holds like a book so you can relax and browse on the go, and at your destination you have a large display for presentations. Because it is charged via USB-C Power Deliver, you don’t even have to take the 65W charger with you, because you can find suitable power supplies elsewhere. In the office, the Fold is more likely to be connected to external peripherals if it isn’t just a second device.

You can buy the fold separately from the sales channel, but Lenovo warns that larger quantities, about 100 pieces, will bring wait. Lenovo apparently has no plans to market many of these flexible devices. The costs are still too high for that. The ThinkPad X1 Fold will be a demonstration: see what we can build.