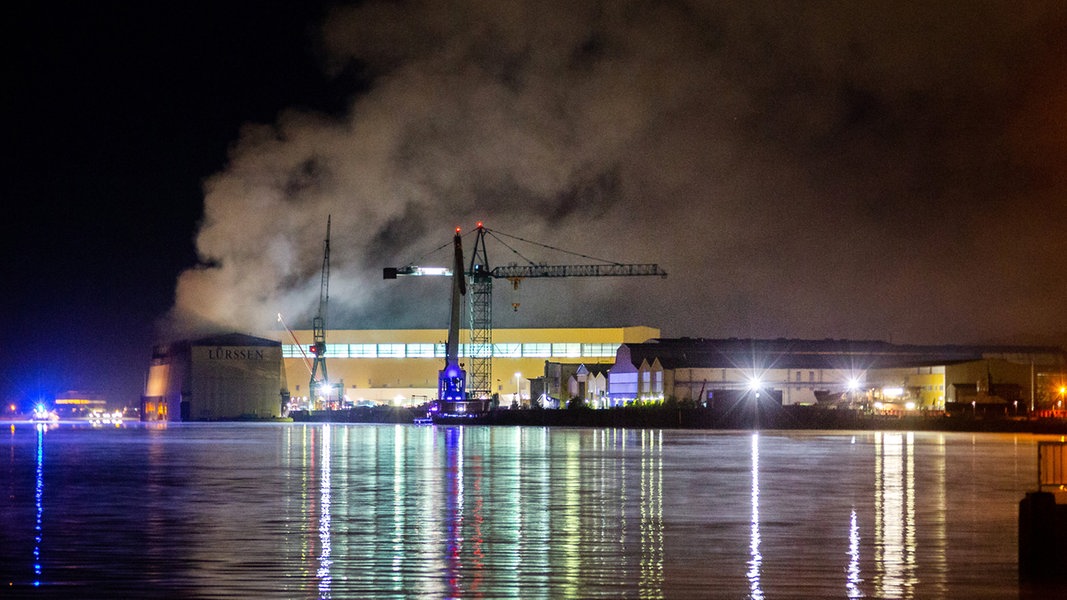 A large fire at the Lürssen yard in Bremen-Vegesack may have caused tens of millions of dollars. The fire broke out in a luxury yacht in a construction dock during the night of Friday around 2 o'clock. According to information from the "Weser-Kuriers" is the 146 meter long "Sassi", which should be completed by 2020. The fire could be for information from Radio Bremen is being cleaned up until Saturday morning – if an extra extinguishing system works in the ship as expected by the fire brigade, they say. First messages, after which the dock could collapse, meanwhile the fire service contradicted. No one was injured. The cause of the fire is still unclear.

Fire at the shipyard of Lürssen under control

The fire at the Bremer Lürssen shipyard is now under control. But firefighting can last all weekend – from water and land.

At night a fire broke out in a floating dock in Bremen. A luxury yacht was built at the moment in the dock. The fire brigade extinguishes from land and water.
Video (00:31 min)

The fire service does not reach the source of the fire

Up to 170 firefighters from Bremen and Lower Saxony are in action according to a Bremer spokesman for the fire service. The factory fire brigade of the Meyer shipyard in Papenburg is also in action. Because of the design of the ship, the removal is particularly difficult. Sometimes the roof of the 200-meter long dock was 130 meters long. Three decks of the yacht were on fire, according to the fire department. According to RB, the fire brigade arrived in the dock and on the ship in the afternoon to fight the fire from there. A fireboat with water cannons is used on the water. Also problematic for the emergency services was the height of the dock. Only with turntable ladders did the firefighters approach the 35 meter high building.

The traditional company Lürssen in Bremen builds luxury yachts that are among the most exclusive and expensive in the world, as well as military ships. The shipyard employs approximately 1,400 people.

At night a fire broke out in a floating dock in Bremen. Apparently, a luxury yacht has been built. Operations management has requested assistance.
Video (03:09 min)