AfD is gaining popularity after protest in Chemnitz 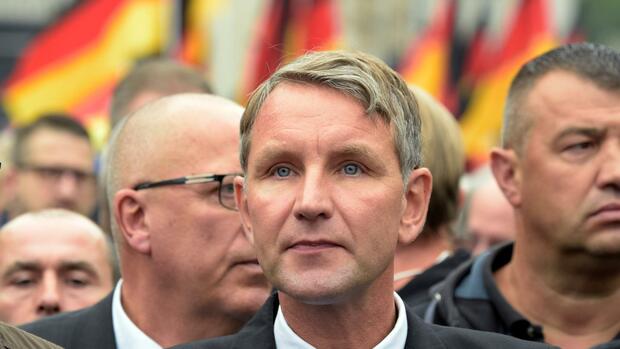 Björn Höcke, chairman of the AFD faction in the Thuringia federal parliament, takes part in the demonstration of AfD and the xenophobic coalition Pegida.

New YorkThe photo 's of the protests in Chemnitz passed the world. After the violent death of a 35-year-old in the Saxon city, there were some violent riots. Right-wing demonstrators, including numerous supporters of the alternative to Germany, who marched against the refugee policy, met on Saturday with thousands of counter-demonstrators.

Amidst these controversial incidents, which also caused a sensation worldwide, the AfD placed this week in the election favorites. In the Sunday trend, which the polling institute Emnid calls for "Bild am Sonntag", the party won one percentage point compared to the previous week and was 15 percent.

Saxony has scheduled 2019 state elections. Political experts warn that the AfD can make big profits in the elections or even surpass the ruling Christian Democrats. The CDU in Saxony is currently losing support, while the AfD would be the second strongest force in the state.

According to a recent Insa survey, the CDU around Premier Michael Kretschmer loses 4 percentage points against the Insa poll in early June and is 28 percent. Meanwhile, 25 percent of AfD's respondents agree.

The SPD, which rises to 19 percent with one point, also scored a plus. The CDU / CSU stays at 30 percent just like the previous week. The FDP and the left are each unchanged at nine percent. One point must be given by the Greens, which now come to 14%. The other parties account for four percent, one point less than in the previous week. For the Sunday trend, Emnid interviewed 2390 people between 23 and 29 August.

Meanwhile, the majority of the population is convinced that East Germany has a bigger problem with right-wing radicalism than the West. According to an Emnid survey for the "Bild am Sonntag" 66 percent of the respondents indicated this, only 21 percent saw it differently. Even in East Germany, 57 percent took this view, while 39 percent said that the problem is greater in the east than in the west.

For 66 percent of Germans, according to the survey, the country has changed since the beginning of the refugee crisis in 2015 to the negative. Only 17 percent of respondents said that Germany had developed into the good. Four out of five citizens (82 percent) see the social climate as significantly worse compared to previous years, 11 percent denies this.

"The country has changed a bit," said Federal Interior Minister Horst Seehofer (CSU) of the "BamS". "Tolerance limits are falling, debates are getting hotter The public's fears and worries about the migration problem have increased The problem divides and polarizes society in our country" Only 27 percent of citizens are against protests against foreigners, 66 percent are against. But 71 percent consider protests against acts of violence by foreigners as correct, only 21 percent wrong.

With material from Reuters and dpa