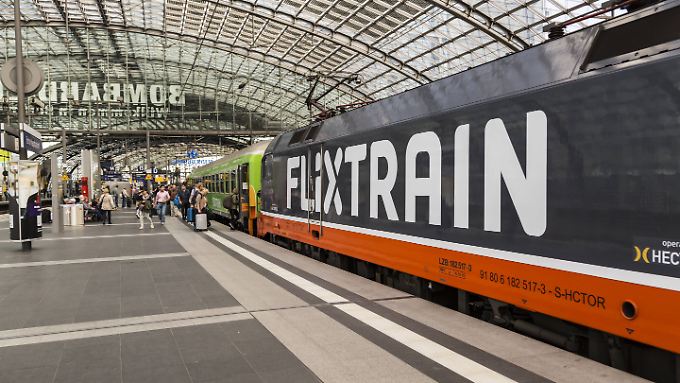 Flixtrain also runs on the routes Stuttgart-Berlin and Cologne-Hamburg – but that should not always be seen on bahn.de.(Photo: image / STPP)

On bahn.de all travel options must be mentioned, including those of competitors of the site operator Deutsche Bahn. But according to Flixtrain their offers are only "vague". The company now wants to take legal action against this.

The long-distance holiday provider Flixmobility (Flixbus / Flixtrain) continued Deutsche Bahn to display its trains on the internet. "In July we filed a lawsuit because Flixtrain on bahn.de has only been sketched out," said managing director André Schwämmlein.

Their offer is sometimes not shown when looking for the fastest connection, a spokesman for Flixmobility criticized. Occasionally on the site so far that savings prices are not available. The company sees unfair competition and wants to take action against this at the court of Hamburg.

Schwämmlein told the "Manager Magazin" but bahn.de was "the central information platform for customers and legally obliged to show all travel options by rail". In suburban traffic that also works. A spokeswoman for the court in Hamburg initially did not want to comment.

The railway rejected the charge. A spokeswoman Flixtrain accused the competitor "in the public vote against the DB". The lawsuit was received and will now be investigated, according to the spokeswoman. "Apart from that, however, we are talking about Flixtrain on this subject and we have already changed some points in the sense of Flixtrain." Flixtrain sells its tickets through its own booking platform, not via the side of the train.

The Munich-based company is not only the largest bus company in Germany, but also sells train tickets on the Stuttgart-Berlin and Cologne-Hamburg routes. Flixtrain drives at least once a day on these routes – with old, green painted DB cars, which the company had taken over from the private railway companies Locomore and HKX. The trains are the only competition for the track in long-distance rail traffic.