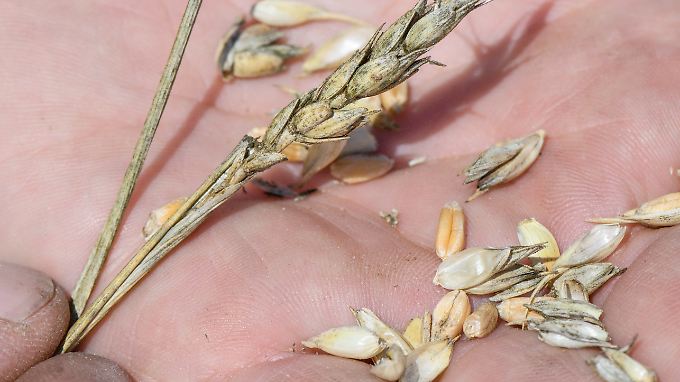 Not only the grain suffers from the low rainfall, but also sugar beet and potatoes.(Photo: image alliance / dpa)

A dry summer is behind the farmers. Especially the grain harvest was therefore bad, says farmer-president Rukwied, who wants to present a crop balance. And the government also determines numbers and decides on possible help for the farmers.

The German farmers' association urges rapid assistance for emergency aid from the state in the event of serious unsuccessful harvests as a result of the drought. Losing significant profits is a reality, said farmer president Joachim Rukwied. "We expect the federal states and the federal government to activate the emergency aid situation." It is not about support with the watering can – but specifically where there is a need for the existence of companies and partly low yields of 30 to 70 percent.

Minister of Agriculture Julia Klöckner wants to inquire in the cabinet today about the official crop report and decide whether the federal government provides help again for the first time since 2003 because of a drought. A prerequisite for this is that damage of a "national scope" is established. In fact, the federal states are responsible for relief measures in extreme weather conditions, but the federal government can also intervene for national events. The farmers' organization also presents its harvest balance today. He has already demanded assistance of up to one billion euros.

It hit the north and east of the republic very hard, Rukwied said. He spoke of a "very bad grain harvest 2018". Since there had been no significant rainfall for weeks, sugar beet and potatoes also suffered. The purchase of animal feed is also "a huge problem" for many farmers. It is hoped that help can be paid later this year.

With the exception of fruit, there were fewer harvests, said the farmer. This should "certainly lead to stable, in some areas, also slightly rising prices". Rukwied argued that a lower VAT rate should apply to insurance policies that include drought damage. This is already the case with hail insurance.

Green party leader Katrin Göring-Eckardt has warned against a decision about possible Dürrehilfen before the farmers "just passed a fixed rate again more money". Targeted financial injections for farmers who are currently most affected should indeed exist, but they have not provided a sustainable solution, Göring-Eckardt said in the newspaper "New Osnabrück".

That is why the urgently needed change in agriculture had to be initiated now, she asked. In the future, EU funds should no longer be allocated on the basis of size, size or production mass of the companies, but should be focused on the ecological restructuring of agriculture. "In the future, it must be true: sustainable agriculture is supported," Göring-Eckardt said.

According to her, farmers are "victims and perpetrators at the same time" in the climate crisis. The current crop losses are partially homemade. "Too little humus and too many pesticides that kill lives have made the soil susceptible to erosion," said the green politician.