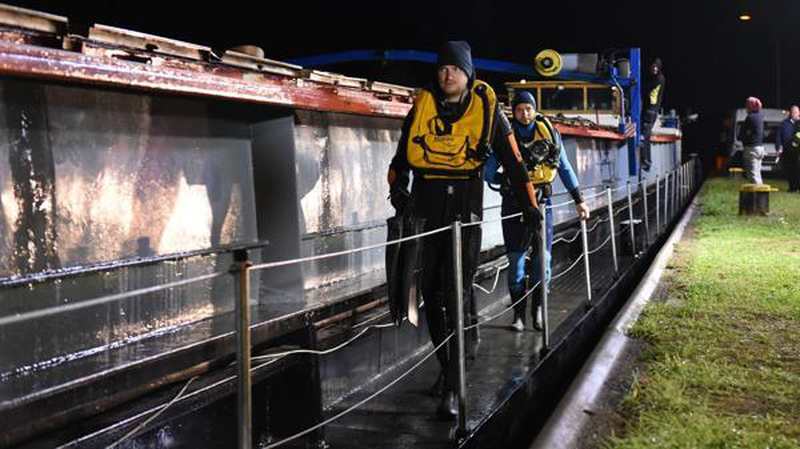 "Schiffshavarie" read in the night from Saturday to Sunday, the Einsatzmeldung the Grossleitstelle: In the coastal canal, on the height between Westfalendamm and Achterdiek, a cargo ship threatened to sink. The ship apparently has an environmentally harmful load on board – shredded lead batteries from car batteries, it is said. But: "The ship is not a threat – neither for the environment nor for traffic," said a spokesman for the Waterways and Shipping Office on Sunday afternoon.

It was Saturday night, just after 22:00, when the Polish captains noticed the incoming water. The cargo ship collapsed and eventually landed on the edge of about three meters deep ground in the coastal channel. More than 30 troops, including water rescue from the fire brigade, were put into operation shortly afterwards, alongside police, water police, lower water authority.

During the night, the specialists agreed on the further course of the storage. Divers had examined the danger situation and the condition of the ship – before a possible pumping out of the infiltrated water eventually had the first amount (more than 150 cubic meters it was until midnight, it was said) and possible pollution clarified, because a return to the channel could affect the environment.

However, it was clear shortly before midnight: the ship had no side cracks (the divers could have "crammed"), but apparently tore the ground open, but it was over. "Stable", as it was called on the briefings.

Water samples were taken again and again, both inside and outside the 85-meter long and 9.50-meter-wide ship. Even brands had to keep an eye on a change in the water level. However, the results have calmed down. Nothing has come through, nothing has come out.

The ship has a draft of 2.83 meters. Whether the bottom of the ship is ripped open due to the short distance to the bottom is not yet clear.

At 2 o'clock in the morning the specialists from the fire brigade, the water police and the waterway authority found that no further acute measures were required – due to the stability of the cargo ship. In spite of this, the emergency services were on site to continue monitoring the water levels.

TUIS, the association of the chemical industry, confirmed during the night that the substances themselves did not cause major environmental hazards. Nevertheless, any pollution must be avoided by pumping the water into the coastal channel for environmental reasons, the fire department.

On Sunday afternoon there was an appraiser of the insurer. More divers have to find out on the same or the next day which damage actually exists on the ship. Probably a danger is excluded. The cargo must not be affected by the flood.

The ship, the "Nawatrans 2", is registered in Moers (North Rhine-Westphalia). In the first information about the troops on the spot there was still a Polish ship. In fact, the crew comes from Poland. The 800-hp watercraft was built in Germany in 1966 and was the first unconfirmed find on the way to Nordenham.

In the following days, under the direction of the Waterway and Shipping Office, it will be clarified how and when the cargo ship can continue the journey as quickly as possible, safely in traffic and the environment. The coastal channel was not closed, but the Revierzentrale in Duisburg and the traffic center in Bremen informed all passing ships about the incident.

Meanwhile, the water police of the "accident" has agreed and determined. "To date, it is not clear why water has entered the cargo ship," it said on Sunday afternoon at the request of the NWZ of the authority.