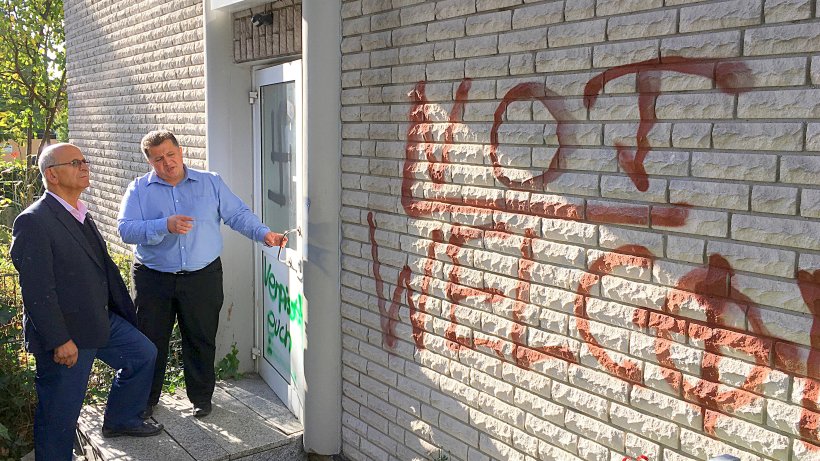 Gladbeck.
Two private houses of members of the mosque association were also sprayed. State Security is now evaluating the video from the security camera.

The mosque on Wielandstraße was smeared with extreme right-wing symbols and xenophobic slogans in the night of Monday. "Not welcome" is to read about the side entrance, on the front door a swastika.

The board of the mosque association is shocked and has filed a criminal complaint. The status protection also identifies and evaluates a video that the surveillance camera has recorded.

"Then the culprit is seen with a torch, when he smeared the door with paint spraying at the clock of 3.08", said the vice president of the mosque Muzaffer Subasi.

Meanwhile, President Nadir Kahraman's telephone continued almost non-stop. Many of the 550 parishioners called to express and express their horror and solidarity. By four o'clock in the morning, Kahraman said to him: "By a parishioner on his way to work, parked in front of the mosque."

The open form of rejection is new

This form of rejection, open and offensive with color spills on the church, did not exist in Gladbeck since the mosque community was founded, the president said. Two years ago, however, he had achieved considerable hostility in the form of anonymous letters after the muezzin conversation was introduced via loudspeakers in the mosque. With anti-immigrant messages such as "Disappear, this is our country" or in the form of a package with cut pig legs.

He also informed the Consul General of Turkey in Münster, Pinar Gülün Kayseri, about the current incident, according to Kahraman. Kayseri was only in early September in Gladbeck to celebrate the renewal of the twinning between Gladbeck and Alanya.

The perpetrator (s) may have local knowledge

The police asks witnesseswho can help to clarify the facts or identify the perpetrator or perpetrators to report to the Office.

Via the security camera the time of the violation can be limited to Monday morning, around three o'clock. Comments and remarks below
0800/23 61 111.

A connection between the deed and the dispute about the inauguration of the new Ditib Central Mosque in Cologne and President Erdogan's visit was possible, according to Muzaffer Subasi. A proof that the perpetrator (s) have local knowledge is that "two houses of parishioners on the Wielandstrasse were smeared with slogans and symbols."

There had been phone calls to other mosques in the area, nothing had happened. "Therefore, it is probably not a supra-local coordinated action." This is in contradiction with Franz Kruse from the left, who speaks of right-handed radicals. He was told that "there were graffiti with the same colors as in the mosque in Castrop-Rauxel".

The city leaders around Mayor Roland are deeply affected by the act: "I deeply regret the situation, it harms us all," Roland writes to Nadir Kahraman. "The perpetrators clearly want to drive a wedge between Gladbeckerinnen and Gladbecker of a different origin. political events, this behavior is totally unacceptable, and as scandalous, hurtful and irresponsible as these events are, we must not forget that these are the actions of individual deceptive people. "

It is important not to let the good coexistence of an individual be destroyed, to stand together and to make it clear: "Gladbeck is and remains a city of tolerant solidarity in Gladbeck, where racism and exclusion have no place!"

Another color smear was discovered on the weekend at the Stahlstele for the monument in the Wittringer Wald. A citizen who had walked around in the park had informed the city on Saturday afternoon.

On the stele that was erected to commemorate the millions of victims of war and fascism, the slogans were smeared with a green felt-tip pen that denied the scale of National Socialist crimes: "There were not six million, you believe everything!" And " Who commemorates the German women and children who have been raped and killed by millions? ", Wrote the perpetrator.

"We have filed criminal charges against the unknown," said David Henning of the city's press service. In addition, the fire brigade quickly removed the graffiti to provide the perpetrator with no other forum.

Several swastika graffiti have recently been distributed in the urban area, for example at the bridge over the B 224 at the level of the outdoor swimming pool, at lanterns in the Wittringer Wald and in the Nordpark. The city had also filed this complaint against unknown.