On the edge of a Pegida demo: TV reporters accuse police of intimidation 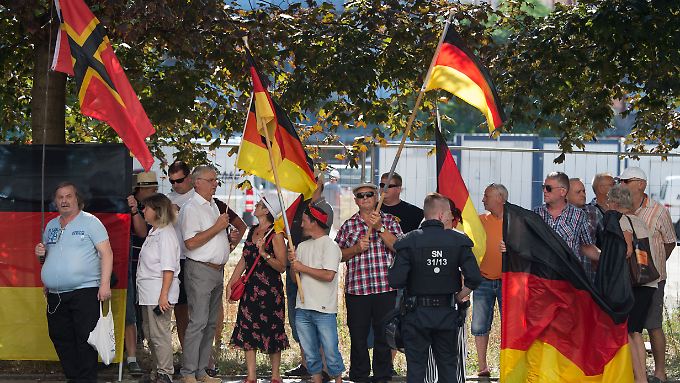 
During the Merkel visit to Dresden, a camera crew is detained by the police in the middle of a Pegida demo. While the Saxon Interior Ministry defends the proceedings, a tweet by Prime Minister Kretschmer also provokes outrage.

The Saxon police are criticized for their actions against journalists on the sidelines of the visit of Federal Chancellor Angela Merkel to Dresden. According to ZDF editor-in-chief Peter Frey, a camera crew on Thursday on Merkel's mission was attacked verbally by protesters at Pegida and detained by the police for about three-quarters of an hour.

"The ZDF requires a statement of the process," Frey said. "It is a clear limitation for free reporting and the team has behaved correctly." A video with excerpts from the incident and a tweet from the Saxon Premier Michael Kretschmer led to public anger during the weekend.

"The only people who are serious about this video are policemen," Kretschmer wrote on Saturday. On Sunday he said: "The matter will be handled calmly and then we will see where we are." His job as prime minister is also to meet the officials, "and I do."

Team wanted to shoot at "Frontal 21"

The Saxon Interior Ministry defended the police, which according to advertisements had determined the identity of journalists. "If a complaint is filed, it does not matter who, the officials have to act and take personal information," it said in the statement. "We should not judge film films prematurely, but quietly view the entire raw material." The police chief of Dresden has invited the reporters for an illuminating conversation.

One of them had posted a movie on Facebook last Friday. According to his information, the team wanted to photograph for the ZDF program "Frontal 21". "But then some supporters of Pegida AfD were disturbed by our shooting and asked the police to intervene, the Saxon officials came and suddenly we were in a police action," wrote the cameraman. It took about 45 minutes. Policemen would be the 'executive' of the Pegida movement & # 39;

More on the subject

The video shows how a participant does not demand the demonstration of the anti-Islamic and xenophobic Pegida movement to be filmed. He insults the cameraman and asks him loudly to accompany him to the police officers who are standing nearby. Later the TV team is checked by civil servants. "I see policemen who do not explain why they prevent journalists from doing their job, I see Pegida, who offends the press," the head of the Greens in the Bundestag, Katrin Göring-Eckardt, tweeted. A prime minister, who believes that police action is serious, must ask himself whether he is on the side of democracy and freedom.

Enlightenment is also demanded in parliament. If the allegations prove to be true, the Saxon police would once again have made the "straw man of the pegi", said left-wing interior expert Enrico Stange. The claim that the police were bombed by Pegida and AfD supporters and the free reporting "with the investigation of alleged crimes", weighs heavily, said his green colleague Valentin Lippmann.