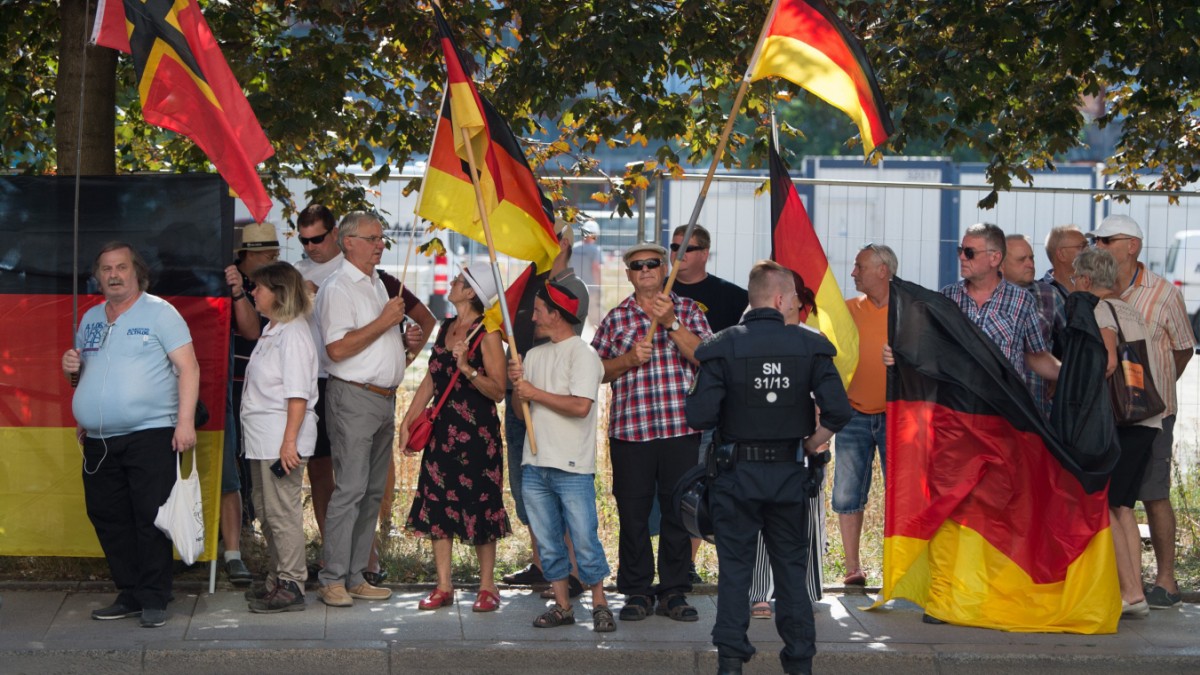 When Angela Merkel had been to Saxony last Thursday, it was rather intolerant compared to previous campaign appearances. About 300 supporters of Pegida and AfD had made an appointment in the Saxon parliament to protest against the Federal Chancellor – a manageable number for Dresden. However, an incident on the edge of the demonstration now leads to political upheavals: a ZDF camera crew, which accompanied Merkel's visit to the magazine "Frontal 21", should have been prevented by the police at work.

The freelance journalist Arndt Ginzel had posted a video of the incident via Facebook and Twitter. Ginzel wanted to document the demonstration together with a cameraman. The cameraman first approached the congregation only, was then verbally abused by a participant and asked not to film. The police subsequently arrested the cameraman to check his personal details and pressure card, Ginzel describes the course against the Süddeutsche Zeitung . "A reason for the police action that we were not called."

When Merkel visits, the journalist is held for 40 minutes

A Protestant who closely followed the scene filed a complaint against Ginzel and claimed he was offended. Ginzel denies that, he even offered the police to search the images to clarify the facts. This was rejected. Also, the request to identify themselves, the officials were not observed during the 45-minute incident. "The police do not only hinder our work, it encourages Pegida followers to encourage their aggressive behavior towards journalists," said Ginzel, who mainly investigates investigating, even in the right scene.

Michael Hiller, Managing Director of the German Journalists Association Saxony, condemned the Action of the officials and demanded an apology. Enrico Stange, the domestic spokesperson for the left in the Saxon state parliament, accused the police of repeatedly appearing as a Pegida stooge and demanded that the incident in the Domestic Committee be on the subject. Valentin Lippmann, spokesperson for the Greens, said that the police would not allow themselves to be misused by opponents of the free press.

A tweet by the Saxon Premier Michael Kretschmer (CDU) caused severe criticism on Saturday. "The only people who seem to be serious in this video are police officers," wrote Kretschmar, who caused a shorthorm. Hundreds of commentators accused Kretschmer of discrediting the journalists concerned and impartially investigating the case by making his statement impossible.

An investigation by the SZ to the Ministry of the Interior and the police remained unanswered for the time being. On their Twitter channel, the police asked Saxony for patience during the weekend and said that the Dresden police commissioner invited the journalists for an "enlightening conversation." The Saxon Ministry of the Interior warned on Twitter before "premature assessment of cut films". In the case of an advertisement, police officers should act and register personal data. "Of course that's exactly what happened, nothing more and nothing less."

With the new EU data protection regulation, photographers are encouraged to ask people for permission before they can be photocopied. Journalists are excluded from the regulations, for them the so-called media privilege applies. In addition comes paragraph 23 of the Art Copyright Law. Accordingly, "images of meetings, lifts and similar events in which the represented persons have participated" may also be published without permission.