Roof construction of the Association of Municipalities collapses 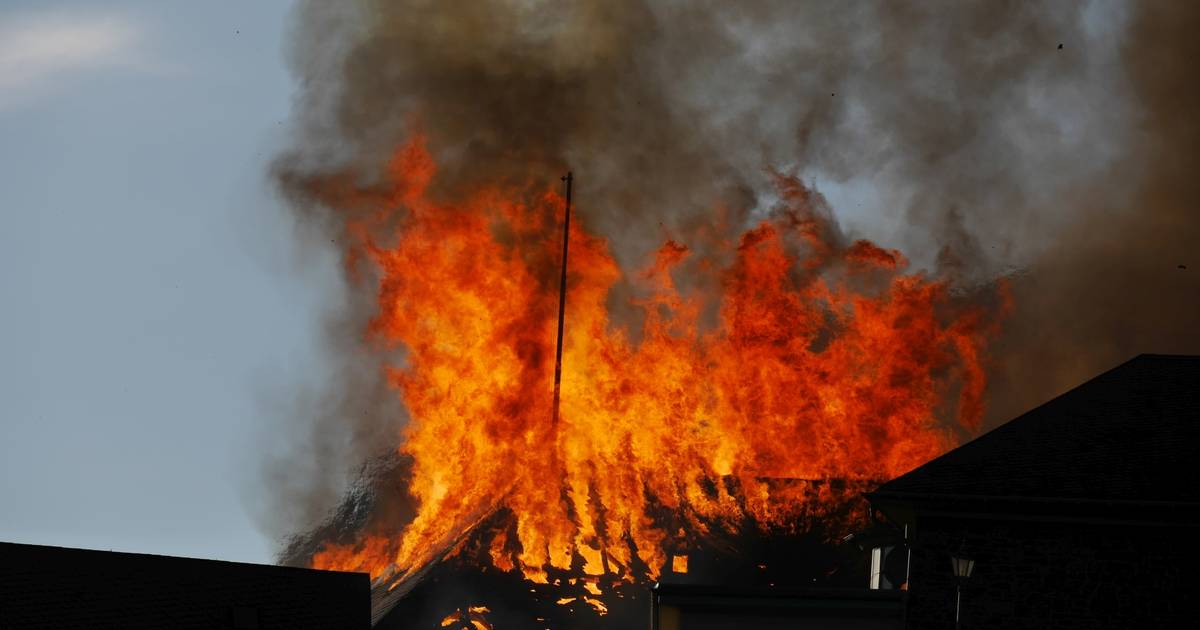 The attic of the Verbandsgemeinde administration in Saarburg burned down on Sunday evening. Parts of the facade have collapsed. About 200 firefighters are obliged to extinguish the fire.
By Bernd Wientjes

At 6.46 pm the first call comes to the police. From the roof of the municipality of Verbandsgemeinde near Saarburg, the smoke from Boemundhof penetrates. Two minutes later, the fire department of the Beurig district in Saarburg is present. Shortly after, the first flames hit the roof.

Fire smell smells all over the city. The smell of burned wood can be smelled as soon as you drive to Saarburg.

Instructor Bernhard Klein warns the immediate surrounding dams of Konz, Mettlach and Merzig and a fire fighting train from the fire brigade of Trier. 200 Wehr people are in action. One is taken to the hospital for exhaustion.

Smoke rises. New fire engines are constantly arriving. Wehr people are on the road in the entire center of Saarburg. There is blue light everywhere. The entire city center is closed to traffic.

For the ice cream parlor Cortina, a few families are eating ice cream. Shocked, you look again and again at the building, where smoke still flows from the roof and the flames.

From the Saar to the Boemundhof, a kilometer-long snake is laid to supply sufficient extinguishing water to the fire. Wehr people remove the flames from the attic two hours after the outbreak of the fires. Most of the roof is just a skeleton. Parts of the facade have collapsed.

Employees of energy supplier RWE have cut off the power supply around the building.

Five turntable ladders in use. The fire tries to control from different sides. Firefighters can not enter the building, dating back to the 16th century. It threatens to collapse. Therefore, it can only be removed from the outside. The armed forces inject up to 70 cubic meters of water from the turntable ladders on the roof. Residents of the surrounding houses have to leave their homes during the extinguishing, but can return two hours later.

Saarburg & # 39; s mayor praises the professional work of the relief workers. It was a "very difficult situation", he says late in the evening. The employees of the municipality have informed Dixius that they can not come to work on Monday. "We do not know when we will be operational again." He hopes that all data stored on servers will still be usable.

On Monday it will first be checked whether the building can still be used. Dixius suspects that large parts of the administration have been destroyed by fire fighting water. His office too. Above that parts of the pediment have collapsed. The mayor of the Verbandsgemeinde Kell am See, Martin Alten, is located on the premises. On 1 January the community merged with Saarburg. The fire also does not change anything, say Dixius and Alten in unanimous agreement. Alten offers that parts of the administration of Saarburg in Kell can be accommodated.

The district administrator of Trier-Saarburg, Günther Schartz, commends the professional dedication & # 39; of the auxiliary staff. In addition to the army, 50 forces from the DRC and 20 police officers are in action. That was a "one-off event". They will try to get the administration up and running again as soon as possible.

The center of Saarburg must remain closed until Monday morning. A fireman stays on the ground all night.