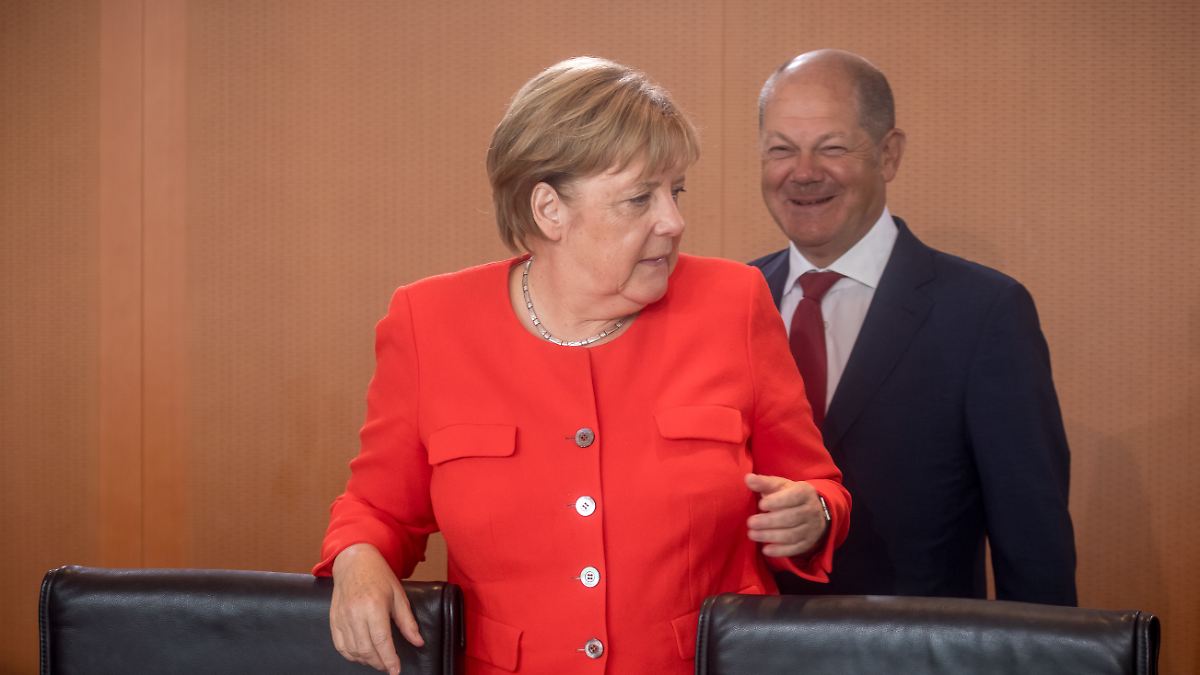 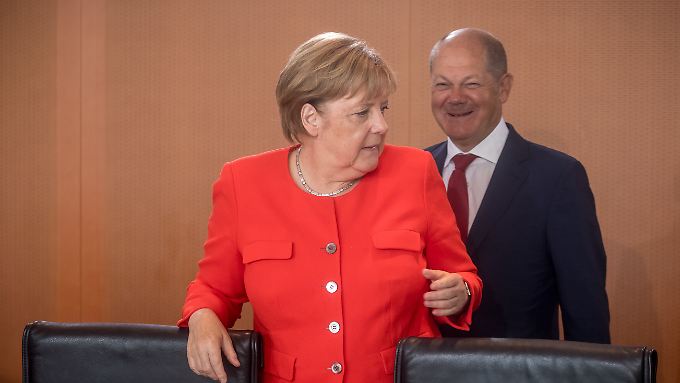 Merkel also wants to provide social security after 2025. However, she reacts cautiously to Scholz's plans.(Photo: dpa)

With his plans to stabilize the pension level until the year 2040, Minister of Finance Olaf Scholz calls for much criticism. The chancellor also reacts cautiously. The government wants to wait first for the results of the expert committee.

Chancellor Angela Merkel is reluctant to respond to the initiative of vice-chancellor Olaf Scholz to guarantee a stable pension level after 2025. Government spokesman Steffen Seibert stressed that the government continues on the basis of the coalition agreement. This only determines that up to 2025 a pension level of 48 percent is guaranteed compared to the average income. In addition, we want to stabilize the contributions for the employees to finance the pensions by 20 percent.

What the funding and the pension level might look like after 2025, would have to clarify an expert committee to be set up. "The clear goal of all in the federal government is to guarantee social security for all generations after 2025," Seibert said. He made it clear that the work of the committee, which was launched in June, should not be anticipated. "We all agree in this federal government that we want to take measures that will keep the pension system efficient and sustainable even after 2025."

CDU Secretary General Annegret Kramp-Karrenbauer criticized that Scholz & # 39; s initiative "had a lot to do with party tactics" rather than a serious debate on the sensitive issue of pensions. The social minister of North Rhine-Westphalia, Karl-Josef Laumann of the CDU, said the pension commission had just been set up – Scholz should now "not anticipate the outcome". He was particularly annoyed by his threat of a pension campaign, said Laumann de ARD: "The question of how we can continue with the pension, how we create the balance between the young and the older generation, which is very difficult to interpret in election campaigns. "

Scholz sees the rent problem as important to prevent a government leader like the American president Donald Trump from coming to Germany. "We are at the start of a debate that has a clear goal," said the Spokesman of the SPD politician. "There are different positions that have to come together now." Stable pensions are the best remedy for populist tendencies. But there is still no own financing concept.

Seibert pointed to the development that many baby boomers would retire in the 2020s. Because of the general demographic development and the longer life expectancy, fewer pensioners are paying more and more pensioners. An option to solve this political challenge could be to use more tax money – which would be lacking in other investments for the future.

So far, the SPD has opposed a pension of 68 or 70 years to lighten the pension system through longer working hours. The salaries of the approximately 21 million retirees in Germany last rose in July, in the west by 3.22 percent and in the east by 3.37 percent. The pension contribution is currently 18.6 percent. According to the 2017 Rentenversicherungsbericht, men in Germany received an average pension of € 1076 and women of € 853, with recipients of several pensions (state pensions and occupational pensions) clearly higher. By 2024, the eastern pensions will be aligned with the pensions in the West.

Deutsche Rentenversicherung emphasized that it supports the work of the pension committee. It is important to first create a well-founded database in order to prepare steps for the next decades. "Only when this is available, the effects of these steps can be estimated with sufficient accuracy," said a spokesperson. According to the editorial network Germany, the chairmen of the pension commission, Gabriele Lösekrug-Möller and Karl Schiewerling, said that the contents and timing of Scholz & # 39; s statements should not and may not limit or change the work assignment.

Scholz had told the "Bild am Sonntag": "We will insist that the federal government ensures a stable pension level in the 20s and 30s and presents a plausible financing model, which is a high priority for us."

The Greens criticized the lack of relining with concrete figures. If the SPD really wanted a long-term stabilization, "they would have to seek a broad consensus, instead of using concise slogans as the summer opening for tactical games," said group leader Katrin Göring Eckardt the "Rheinische Post". It was "intolerant and unlikely" when Scholz alone promises long-term pension stabilization from scratch. FDP expert Johannes Vogel criticized Scholz about billions of billions, without saying how this should be financed. The & # 39; baffled response & # 39; of the Union also shows that Scholz touches a sore spot.

The German Trade Union Confederation, on the other hand, welcomed the board of directors of Scholz: "Guaranteeing and adequately financing the pension level until 2040 is the right answer to the legitimate concerns of many employees to not make ends meet in old age." The social association VdK also welcomed the debate. "However, the level of protection must be increased to 50 percent in the medium term," said President Verena Bentele. In the long run, self-employed people, politicians and civil servants should pay for "labor insurance".