49 demolition protocols in "red" buildings have been approved 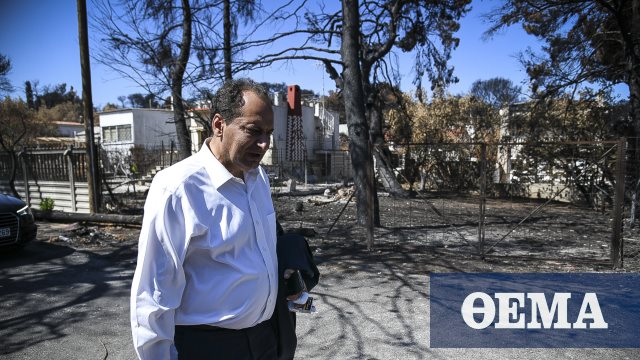 The Minister of Transport and Infrastructure, Christos Spirtzis, today met the coordination committee of residents and associations of Neo Voutzas.

The Minister responded positively to the call to answer the residents' questions, as well as the development of procedures for the recovery of the fire-affected areas.

On the occasion of the demolition, Spitzis let residents know that 49 demolition protocols have already been approved in "red" buildings in the fire-affected areas, and another 20 are still under consideration, for which the Ministry of Culture is expected to be consulted if it is saved.

It also reiterated that the discharge of the inhabitants of the ardent areas by ENFIA is definitive:

"As promised by Prime Minister Alexis Tsipras and the beginning of August with legislation with MAP, the residents of the fire-affected areas are exempt from payment of EFF 2018. Because Taxisnet is not yet informed, it may seem an accusation. not and will be corrected immediately. "

The committee addressed the ministry's text with detailed questions about the "morning" of the regions that were "affected" by the devastating fires of July.

Christos Spirtzis answered the questions that were asked. in particular:

– On the measurements of air, ground, water in the school (2nd gymnasium of Nea Makri) and in general in Neo Voutzas, Mr. Spirtzis said that "measurements will be carried out by Demokritos from the end of August until February. the collection has already begun and the measurements will follow.There are ten certified companies selected to carry out the work.With the three contracts already signed and the timetable for delivery depends on the amount of asbestos. "

– For the fees and their payment procedures, especially for green buildings with damage, he explained that "there is no need for fireproof paper for green buildings – it is enough for the paper of the ministry to carry out the audit. of 5,869.41 EUR and 586.94 EUR, the Ministry of the Interior has promoted the specific funds for the municipalities and the payment is dependent on them. "

– For repair permits, if a firefighter wants to start immediately without waiting for public services, the minister said that "if someone is rushed and wants to start repairs himself, he gets permission from the construction department and then applies to certified companies. receives a compensation of 300 + 250 euro per square meter, provided of course that the subcommittee of the ministry has been accepted.For green houses, small-scale permits can be issued.To those who have houses insured and receive compensation, the ministry will make up for the difference. "

– For the "red" buildings, whose owners postpone the demolition process, Mr. Spirtzis explained that "all the owners are informed by the ministry, and if the owner takes over, he must be demolished in due time." ;

– For repaired buildings that also had random constructions (eg Semi-open spaces), he noted that "if the buildings are yellow, the repair permit covers all buildings – and those legally legalized by relevant legislation. of red they are rebuilt without randomness. "

– For the suspension of forest maps, he noted that "the municipality of Marathon has not yet submitted the housing densities to make the mail".

– Regarding the need for immediate information about the felling of trees, the Minister said that "by the end of this week or early next year, the loggers with whom the ministry has contracted will come, and by the end of August or the beginning of September In cooperation with the decentralized administration, studies on cutting down will be completed and the cooperatives will be announced from Monday onwards and the building blocks will be launched. "

– For flood defense projects, Mr. Spirtzis said that "there are two types: the first is with coins that will be auctioned by the decentralized administration immediately after the completion of the studies in early September." By the end of the year it is expected to be completed. The second type is with the demarcation of the streams, since it started for the large stream of Rafina and for the seven of the Marathon area.For the four streams of Neu Vujza the demarcation will be combined with the revision of the urban plan The occupied communal areas, the roads and the slopes built on slopes are opened. "

Finally, Mr Spirtzis announced that it had been given to the competent scientists the control and study of the species of trees that would be used in the clearing, afforestation and reforestation of the Nose Voutzas area, and pointed out that priority was given to the restoration of the affected areas on both sides of Marathon Avenue, with a view to the international marathon held in November. At the same time, the ministry undertakes to destroy the shelters of the public transport stops by the fire.