Bubbles in the commemorative collection for the victims in Mati 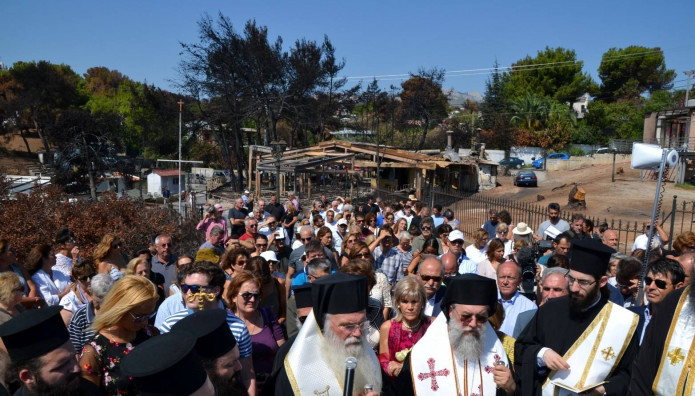 In a rough climate and with the "wounds" open, the 40-day memorial for Mati was celebrated for the victims of the deadly fire of July 23 in which 98 people died.

The monument was celebrated by the Metropolitans of Mesogaias and Lavreotikis, Nikolaos, and Kifissia, Amaroussiou and Oropou, Cyril, to the Holy Church of the Assumption of the Virgin Mary.

Then a commemoration was made to the Silver Coast, where many of our fellow humans died in the deadly fire.

This gave crowd of people from Rafina, Nea Makri and Marathon. Among them many local actors, as well as representatives of organizations and associations in the region.

They ask the victims of the fire to pay their money

While dozens of residents in Mati try to return to a (relatively) daily life, often almost lost all their possessions, they are called to pay the food they received free of charge!

In particular, the Air Force (AI), which supplied food to many victims of fire, had reported that the free distribution of food from 1 September would be stopped.

About 150 people are hosted and the cost of food is about 6 euros for each fire.

The Municipality of Rafina responded immediately and said it would cover the costs of continuing to provide free meals for the 20 families living in the PA buildings. On the other hand, however, Marathon municipality kept silent fish and so the 52 families, their citizens, who were in the same place, had to pay for their food.

Eventually the Air Force extended another week to deliver a free bag to the campsites.