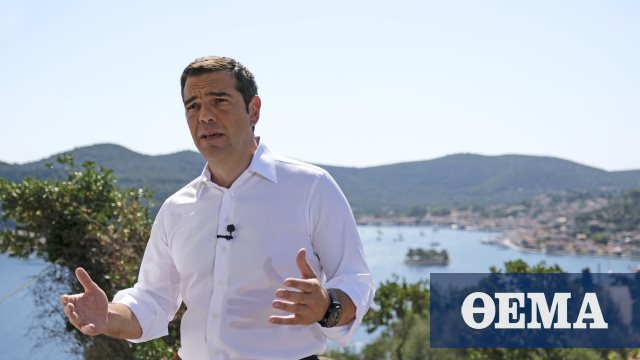 How did the international press react to Alexis Tsipras' statements about the exit of Greece from the memoranda?During a very symbolic visit, Prime Minister Alexis Tsipras today traveled to Ithaca, the legendary island of Odysseus, which for ten years tried to return to his family after the siege of Troy, wrote the New York Times. "With regard to local officials on the island, before his television speech to the nation, Tsipras compared the Greece rescue packages with Odysseus adventures," it said. "We must not forget that the return to Ithaca is not the end of the adventure", the Prime Minister underlined. "Although Greece will no longer be subject to regular checks by creditors to obtain the necessary funds to prevent bankruptcy, the country can not return to the old loose rhythms that have led to chaos.In the past eight years Greece has Preventing bankruptcy by borrowing around € 260 billion from the other euro zone countries and the IMF, in return for successive Greek governments to implement a series of austerity measures demanded by creditors. a quarter and unemployment was on the rise, while one in five Greeks was still unemployed, while incomes have declined repeatedly, while taxes have risen.While Greece has transformed the huge deficit in its annual budget into a considerable surplus, there are still austerity measures on the horizon All pension shortages and tax increases are expected in 2019 and 2020. Greece has a temporary security cushion of EUR 24 billion, created through rescue funds, and is a major economic breakthrough until the summer of 2020. After it should really stay on its feet and therefore take into account the requirements of investors on the international bond markets, because at any issue in the budget the debit interest rates on debt could be seen for Greece, possibly at unsustainable prices. In the coming period, Greece should develop a working relationship with private investors, which needs strong indications of fiscal prudence, compliance with agreed reforms and economic growth to agree to place their capital in a country whose creditworthiness still exists. is much lower than the investment. Tsipras has repeatedly assured that his leftist government will follow the mandatory course of budgetary virtue. At the same time, however, Tsipras also wants to offer a form of help to large groups of people who have been badly affected by the recession – mainly pensioners, unemployed people and low-income groups. Government officials say the announcements will be made public in early September at the opening of the exhibition in Thessaloniki, where governments traditionally announce their economic policy plans, "the newspaper of the American newspaper

Die Welt: At the end of the Athens program, investors are clearly positive

"Greece officially leaves the eurozone protection, stands up again and has to be financed on its own," writes German Die Welt, emphasizing that international investors have reached a positive agreement and that their concerns to borrow money in the country are relatively low. .

According to the German newspaper, "the Greek crisis was one of the biggest crises in history, GDP per capita has almost collapsed in Greece in recent years, at the same time it was the largest debt restructuring activity in history." Nearly EUR 289 billion. loans have been channeled to Athens in recent years by the EU and the IMF, but this phase is over and only one problem is preventing them from becoming more involved again. "Fitch's Greece significantly improved, and Fitch praised the government's spending discipline in this respect, leading to the Treasury's surplus last year before the depreciation of 4.2% of GDP, while this year is expected to reach 3.5%. the rating agency expects economic growth to rise to 2.3% next year, but it is of particular importance that the Minister of Finance n has been able to set up a normal pillow in recent months. The fund now has approximately EUR 24 billion in cash. 9.5 billion of these have already been added, because they are among the last tranche of European partners. This money is deposited into their own account and used only when Athens needs them to pay off their debts. But this is not a problem. "The € 24 billion money cushion is good for about 24 to 28 months of debt service", calculated by Yvan Mamalet and Ciaran O & # 39; Hagan from the Société Générale investment bank. In the short to medium term, the outlook is therefore positive, analysts conclude. "It is difficult to imagine a scenario for the next five years in which Greece could go bankrupt," they conclude. This is the case when the country can no longer finance money directly from the financial markets. Because debt and interest payments can easily be served for years with shares and budget surpluses. In fact, it would be even more favorable if Greece would give up the issue of new bonds. Because the average interest that the country will have to pay for its current debt is about 1.8%. The interest rates on ten-year loans, on the other hand, are still more than 4% – the borrowers would have to pay so much to Athens if they borrowed money from the money markets. A fact that is financially absurd. However, the Minister of Finance has decided to do this – and has already done so. In February he launched a seven-year loan and received three billion euros. There were two more versions planned for this year, while most observers mean that in the meantime there will be only one more. For eight years Greece was dependent on the corvette of international lenders. The third loan program is now being completed. The country is on the way to growth, but it has a huge debt. The reason for the road to markets is because Athens is trying to build new confidence in investors. "You see the completion of the aid program and the financing on the markets as a means to attract investors," according to analysts Société Générale. This should again impress the rating agencies to make further upgrades and thus launch an upward course. "This plan offers an excellent opportunity, but it will take a few years." On the other hand, investors now have a serious problem. "The market for Greek bonds is very inadequate," analysts say. Because there are very few titles and every time the smallest quantity is negotiated, this immediately leads to serious price differences. They advise investors to hold bonds until the end of the repayment period if they want to invest in order to avoid the appointment. It is expected that the issue of new bonds will reduce the problem in the coming years.

French agency: The Tsipras in Ithaca to mark the end of the Rescue of Odyssey

Greek Prime Minister Al. Mr Tsipras, today Ithaca spoke, a symbol of Odysseus' long journey, to celebrate the first day of his country's new era, free from international rescue plans, "reports the French agency in 2015 and forced to take the third and to sign the last rescue plan in July of the same year, chose this way to celebrate the end of the memorandum. Al., Tsipras to initiate the new era for Greece, the Odysseus island Yesterday welcomed president Donald Tusk of the European Council, Commission President Jean-Claude Juncker and the leaders of France and Germany the exit of Greece from the rescue program & # 39; s and praised the efforts and sacrifices of the Greeks and the "solidarity" of Europeans during the debt crisis, but warned that Athens its commitments to creditors must continue to be fulfilled and the rigorous policy must continue in order to achieve the high primary surpluses that it to repay non-debt.

Greece "regains the right to determine its fortunes and its future", said the Greek prime minister today and welcomes the departure of the country from the memorandum, in a television speech by Ithaca, a symbol of the long journey of Ulysses, writes the French Le Figaro. I wish to mark the first day of the new era of his country, free of memoranda and strict credentials for eight years, Al. Tsipras went to Ithaca, a place of departure and return of Odysseus according to Homer, to announce that "it is rising for a new day" for the country, "a historic day, that of the end of austerity and recession policy . " "The modern Odyssey that crossed our country since 2010 is over," said the prime minister for the cameras in a ten-minute speech with a white shirt over the gate of this symbolic island. Use of well-known verses from the poem by Homer, Al. Tsipras praised the courage and the "ability of the Greeks, who, like Odysseus, managed to deal with the Sympaches" of the recession.

La Tribune: "O Tsipras emphasizes that a new day is coming for Greece"

The Greek Prime Minister welcomed the withdrawal of his country from the last aid plan and the debt crisis of nine years, with some references from mythology, writes the French La Tribune.

"Today, a new day is rising to our country, a historic day," Tsipras said in a statement on television from the island of Ithaca.

"Our country has regained its right to shape its own future," added the Greek Prime Minister to the legendary island where Odysseus, the hero of Homer's Odyssey, returned after a ten-year journey.

"Rescue plans, austerity, recession and social desertification are over," he said.

Greece received a total of € 260 billion in April 2010 in exchange for a drastic austerity policy. It is the last Member State of the European Union to leave custody of the adjustment memoranda, after Ireland in 2013, Spain and Portugal in 2014 and Cyprus in 2016, according to the French newspaper.

Vorarlberg: Greece will now stand alone at her feet

"Greek Prime Minister Alexis Tsipras has spent as much time saving the euro in his current speech from the island of Ithaca as Odysseus' unsolved adventure," writes the Austrian Vorarlberg. "The modern Odyssey that has experienced our country since 2010 is over," Tsipras said, stressing that the country has now "been given the right to determine its destiny and its own future". Greece has now been out of the European Stability Mechanism for eight years and will now stand alone at her feet. However, the Mediterranean city with heavy debts will remain under strict control in the coming years. Tsipras also spoke of "the day of redemption" and "the beginning of a new era" after the "state of emergency" of the country in recent years, notes the Austrian newspaper.