Fight with the flames on two fronts 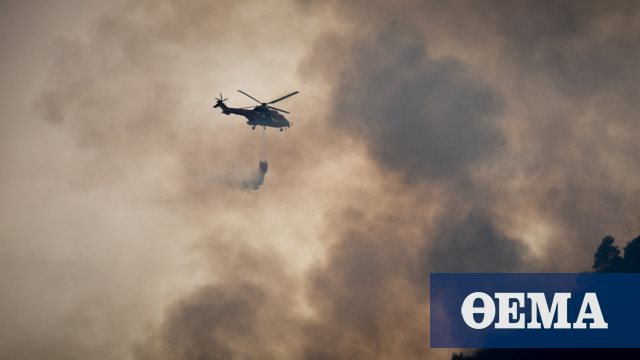 Combat with the flames on two fronts is given by the fire brigade in his area Amaliadas, as after the fire that broke out in the afternoon in the forest area near the village of Dafniotissa, a second front appeared, this time in the forest between the areas Geraki and Analipsi.

Thirty firefighters with 15 vehicles and a group of hikers are rushed and tried, while the extinguishing activities stimulate three helicopters through the air. According to the fire department, the front between Geraki and Analipsis does not threaten residential areas.

# Fire in a forest area between the Geraki and Analipsi regions, in Ilia. 30 firefighters with 15 vehicles, 1 group of hikers and 3 S / MS were mobilized.

Earlier, shortly after 2:00 PM, a fire broke out in the forest area near the village of Dafniotissa, resulting in a mandate for the evacuation of the area by the inhabitants.

According to information, the danger to the village seems to run away. The Mayor of Ilida, Christos Christodoulopoulos, said in his statements to the APEBE that there is currently no danger to the village, while the partial evacuation was mainly for people with health problems and the elderly.

"Our greatest concern is the fire that burns in a forest area so as not to threaten the residential area.There are strong forces of fire fighting both on land and from the air," he said.

Last year, at the same time, there was a fire in this area, which, as the mayor pointed out, is "a forest that was not burned in the 2007 fires".

Meanwhile, in the area the armed forces are being deployed with more than 30 vehicles and 100 men, walking departments are involved in the attempt to extinguish, while three helicopters, three planes are assisted by air and two canaries are expected to extinguish. The extinguishing activities are coordinated by the lieutenant-general of the fire brigade, Kostas Kyriacopoulos, in collaboration with the firemen officer Ilia Pyrrha, Yannis Karamalikis.