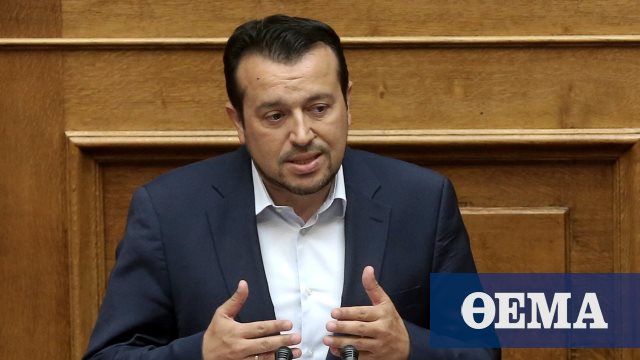 "The commitment to the September 2019 elections will be whether the recovery will continue, or whether we will return to the bankruptcy policy," said Nikos Pappas, Minister for Digital Telecommunications and Information Policy at KONTRA. Before the New Democracy he said that he "lives the greatest ideological and political denial", while noting that the position of SYRIZA is stable for the formation of a non-right wing.

"It is a historic day for Greece, because it is a cross-section of the modern social and economic history of the country, it is the day on which the period in which our country is closed under the Support Program & # 39; s, provides us of possibilities and optimism to continue a recovery path that started with the implementation of the third program, "said Pappas.

"The decline in unemployment did not start last night, it started a long time ago, it has already dropped below 20%, and the next four years may fall below 10% if progressive policies on schedule continue," he said.

Commenting on ND & # 39; s position, Mr. Pappas noted that "the main opposition has not understood" and continued: "Today there is the greatest ideological and political denial." The main opposition does not seem to have drawn any conclusions from the recent It makes the old success stories of the Samara government angry, has not told us what policy it has applied to change, just wants to bring them back, they are nostalgic for the times when, under the threat of memoranda, bankruptcies and ratings , to impose a policy that the majority of people can not win in a democratic and economic order We have an ND that has been visited unable to explain why the policies implemented by its own government have resulted in an economic political and social collapse, and it is on the way to the right-wing extremes with which it has filled its reservoir. to see Mr. Georgiadis and Mr. Boridis on their well-known route, from where they have not left behind anything that they have supported all their years, just feel like the fish in the water in the SW, the accusations of the press and some new representatives to tell us what they say. "

Selection of Mr. Mitsotakis the "instead of SYRIZA" front

In a question about the "instead of SYRIZA" front, the Minister said that "it falls within the limits of an expected political choice of Mr. Mitsotakis and the support team he currently has in the South West, that is, the right-wing bourgeois right wing that can not be reconciled with the idea that left has a government standpoint and does not state that the left is the man who pulls the country out of the crisis. "

He insisted on the invitation to form a non-right stock and emphasized: "We have said all along and said that our own expectation is to broaden the support axis for the progressive policy that is being implemented. in the House and all will be judged, will members of the Movement of Change vote or will they vote for them? "

He should not act as a former Minister of Finance, Mr Stournaras

As far as the Governor of the Bank of Greece is concerned, Giannis Stournaras, the Minister for Digital Policy, noted that "some must remain in their institutional role and not nostalgic for their old role" and continued: "It is fearing economic policy this was exercised when it became Minister of Finance, Mr Stournaras' economic policy was unsuccessful, and rightly the Greek people rejected this economic policy, and some believe that the hard core of the economic policy agenda that they serve is not without coercion can be imposed, which is important to them, so they expected them to go to a credit line as a precautionary measure or get an extension of the memorandum, and should not act as a former Minister of Finance, Mr Stournaras. 39;

Dividing line with the past

Mr. Pappas replied to those who accused the prime minister of saying his speech was "divisive" in Ithaca and said that "we had to take a very serious dividing line in the past."

With regard to corruption and interdependence, he emphasized that "the roots of evil lie very deep in Greece, our struggle against what we call corruption and sexual intercourse must be intensified, non-negotiable and unbreakable."

The agreement with FYROM

In a question about the attitude of the Minister of National Defense and President of ANEL in the nomenclature, Mr Pappas replied: "It is clear that there are different views between the two government partners on the solution of the FYROM nomenclature. I think that there is currently a majority in Parliament who can make this solution work on the table and, of course, there is time I think, when it passes and while the water flows into the quarry, it is even convinced that the completion of the Prespa agreement is in the interests of Greece and we are trying to convince Panos Kammenos ".