In the dark Hydra – Tourists search for tickets to leave 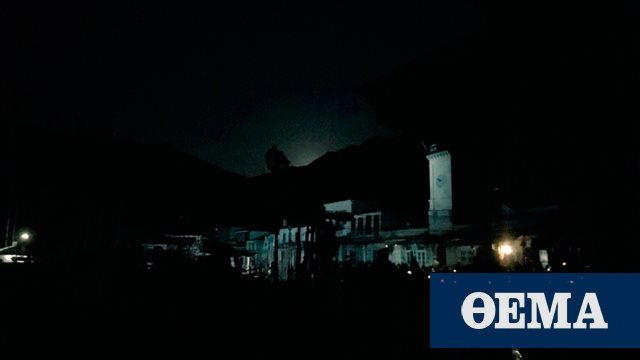 Early in the early hours of Monday it is expected that the electricity and water supply in Hydra will come back: at this moment, according to information, there is tension in the port of the island, because hundreds of visitors try to get a return ticket to Piraeus, which is the whole experiencing day-long discomfort: from the black-out, has been interrupted and the water supply on the island, while thousands of visitors. restaurants can not work, while companies suffer total losses. Until late in the evening, however, the DEATH was not able to clearly explain the cause of blackjack, while generators (power generators) on the island were expected to provide a temporary solution for the electrification of the Saronikos. .

Skai reporter Nikos Podfantis said that the inhabitants of Hydra demand that the island be declared in an emergency, on the other hand to launch ships for those who want to leave the island.

the # Hydra now they ask for her # Douro to declare the island in a state of emergency # Crowd to find boats to let tourists off the island if we have conflicts in the port # Stream # PPC @renadourou # YES pic.twitter.com/WRnaOwEjrP

What happened? From 5.30 to sunrise without electricity, Hydra Without flow or water, Hydra stays at 5.30 in the morning when a blackout from the island so far has been caused by an unknown cause. The interruption of the electricity supply also had direct consequences for the water supply of the island, because the pumping stations do not work. According to information, the navy was contacted for water transport on the island, which is currently "sinking" through tourism, with aquifers. Prolonged power outages have caused serious problems because shops can not work at all, goods are at risk of being spoiled and few tourists are looking for a way out of the island.

According to recent information, the damage seems to be due to the distribution network and not to the interconnection of Hydra. All technicians are working on solving the problem, but their work is complicated by the fact that vehicles are not allowed on the island.
Up to now, there is no official information about the causes that caused the disruption, while the time to repair the damage is unknown.
Mr. Hydras, mayor of Hydra, said on protothema.gr: "From 5.330 Hydra has no electricity, but PPC unfortunately until this time we talk (shortly after 4 pm on Sunday) did not exactly find where the damage is and has an indication that can not be confirmed, because since the desalination plant works on electricity, the water production has been stopped for several hours on the island We all have a problem at the moment on the island and I think that in the coming hours the PPC will damage the Before the nightfall, because while in the office was insured by the PPC that would be a problem of a few hours, now I see that it is & # 39; s in the evening and the problem persists. "

Mr. Mankolis Tsakiris, Secretary of Hydra City Council said on protothema.gr: "As Secretary of the City Council I will ask for the criminal prosecution of those responsible because this power outage is disastrous for our island and tourism. Furious with people and people are furious, you can not bathe, the ice, the food is melted in the fridge because we often do not have electricity on the island, restaurateurs try to save what they can with ice, but it is not a solution. It is a great resistance to this for our island ".

What does DDDHE say about blackjack

Following the total disruption of electricity in Hydra, PPCDE says that it will continue its efforts to re-elect the island as soon as possible at 17:00 on Sunday afternoon.

According to a relevant announcement, CESR immediately after the interruption of the inspection of the Kranidi substation network to Thermisia (total length of approximately 25 km) and the island's submarine connections, while its crews were inspected under particularly difficult conditions – as it is forbidden to use a vehicle – the Hydra network.

At the same time measures have been taken for the direct transfer of force-generating pairs to re-electrify the island if the recovery of the damage proves to be time-consuming.

Before financial disaster speaks of his side, Mr. Kostas Kehagioglou, restaurant owner. "It closes one store after another, here in Hydra it's a big disaster for our island, and even at the height of the tourist season I had to throw away all the food and drive away 100 customers today.70 customers for tonight, which I also will try, because you can not feed them from the moment there is no electricity and water There are too many hours without electricity on the island and it is difficult to solve the problem for the island and the destruction for me a because who will repay me, now? The state? "he says.

Respectively extensive problems with interruptions in electrification also occurred this summer on other islands and mainly in Mykonos.

It should be noted that the blackout on the island of Argosaronikos only comes a few days after the damage to the high-voltage center of Pallini, leaving half of Attica without electricity for half an hour.