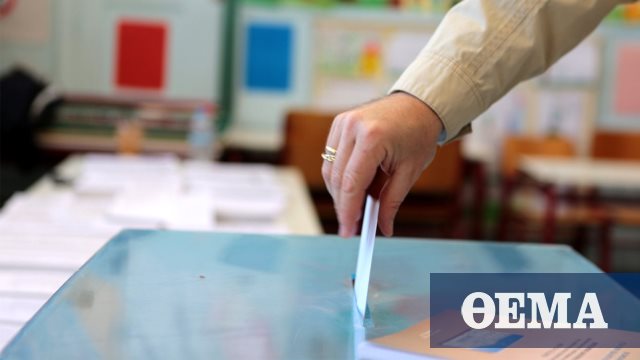 Ordinary opposition moves on the path of self-righteousness despite the inflection of the clear predation that separates it from SYRIZA. The design, while the country entered a period before the elections, seems to be consolidated because the majority of public opinion predicts the prevalence of the New Democracy in the next elections.

The two-digit difference maintained by the main opposition – is passed by 10.9% to the vote on the valid – along with the general negative option which, as Marc's research on "THEME" on the main choices of government ( "exit from the memorandum", the presidential agreement for Skopje, the responsibility for the tragedy in the Mati, the rearrangement) make the series of parties an irreversible order.

The remarkable resurgence of SYRIZA by almost 3 percentage points, apart from the fact that it is a common finding in periods that coincided with the end of the summer and the positive mood after the break, does not seem to lead to the overthrow of the data that have arisen in the last two and a half years, with the stable and comfortable leadership of the ND, as well as the leader of Kyriakos Mitsotakis with the Prime Minister Alexis Tsipras.

As was the case in September 2017, which had followed the sinking that took place in May of the same year, so now, in the first post-metric reading after the downfall in June, the largest ruling party strengthened its position. According to Marc's findings, however, the revenue for the government camp is limited by the diminishing power of the smallest government partner, ANM. from Panos Kammenos, which drops to 1%, because it seems to be flanked by Kyriakos Velopoulos' new Greek solution.

In the mood, New Democracy in particular is recorded at 26.5% (+ 0.1% since May), which this year delivers the highest performance. The main opposition party maintains the very high rally of its followers (82.6%), because even the small losses seem to return to SYRIZA. He struggles, however, to attract those who leave the ruling party, mainly because of the centrist and traditional anti-reflections of the reflexes that characterize the behavior of old PASOK supporters who moved to SYRIZA.

At the same time, SYRIZA increases by 46.5% to 16.9% (+ 2.9% since May), whereas at the beginning of the year it was 17%. The polarization of the last space and the intensity of the confrontation with the main opposition seems to be the main reason for re-spinning a part of the old Syrians. But since one in four of its old voters has already moved (25.5%), the ruling party can not normally expect a reversal, even if it succeeds in repatriation, and those who distance themselves by declaring themselves indecisive (16.1%). ) or tendency to remember, invalid and white (11.9%).

Chrissi Daig drops third by 6.1% (-0.2% since May) due to the stronger decrease (0.8%) of the change movement, which has dropped to 5.7%, retirement of the river, which an independent formation noted the malaise of 1.3%. The KKE is followed by 5.3% (-0.2%) and the club of the parties that is expected to be in the next House will be supplemented by 2.2% (-0.2%) by the Central League. . From the other formations the upward trend is presented by the Greek solution, which rises to 1.8% (+ 0.3%) and possibly has claims to make the surprise that he would enter the next house.

Elements of the measurement show a six-party parliament and according to the THEMA calculations that were made using the proportional distribution method of the undecided (who move steadily in the region of 16%), with the specific performances, ND. would have 156 seats, SYRIZA 67, ATHEX. 24, KIN.AL. 23, the KKE 21 and the Centric Union nominate 9 MPs marginally.

However, the marginal changes observed in the variation in the power of most party formations in the past two years have not shown public opinion about a change in navigation. Instead, all findings of this measurement, as well as several previous ones that evolved in the same direction, lead to the conclusion that the political game has largely been assessed and that only details can change in the course of the polls.

The fact that seven out of ten citizens (69.5%) sees a victory from the ND. is indicative of trends in public opinion. Also a notable indicator is the steadily high in Prime Minister of Mr Mitsotakis (in this research 38.4% versus 25% of Mr. Tsipras), because there is no comparable historical precedent for the current Prime Minister to fall short the contender of the office.