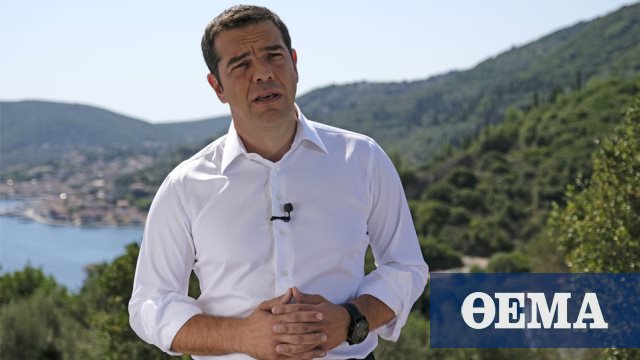 The way in which the government will proceed from now on until the elections, when they are finished, was described by Alexis Tsipras in his speech from Ithaca, from which he had absolutely no self-criticism for the three-year rule of SYRIZA.

It is an indication that even before the referendum and the reversal of the "no" of the people to "yes", the prime minister only came to the conclusion that the people "never accepted the fate of the powerful." And he wrote new page & # 39; s of resistance ".

In the longest part of the 7 minutes and 40 seconds of his request to leave the Memoranda, Alexis Tsipras moved to the polarization rule and warned that "we will not forget those who led the country in the memoranda", while the attack did not went unnoticed and the attack to name them – Loukas Papadimos and Yannis Stournaras.

At the same time, he specifically referred to the "suitors" who, according to him, "wanted to see the boat again, and hold the people again" and "trembled at the idea of ​​an independent justice".

In essence, Alexis Tsipras will focus his rhetoric on Memoranda 1 and 2, apart from the unnecessary third memorandum that he himself signed in 2015.

On the same wavelength, his government partner Panos Kammenos, who stated in a statement after the meeting of the ANEL group that the goal remains "to pay for all those who, in synergy with the davatzians, with the contractors of the postal-they held the domination of the land at the expense of its people and its wealth, to pay criminals who have obtained media to prevent criminal prosecution for crimes they have committed. "

In high tones, officials from the main opposition, led by Kyriakos Mitsotakis, responded to the First Ministerial Order of Ithaca.

"It was another sad show of Mr. Tsipras," said the statement from the leader of the ND in their reply statement.

"Unfortunately, the Prime Minister continues to persevere in his divisive speech," Mitsotakis insisted. "He re-directs fake events, as he did on the night of the tragedy in Mati, then listened in direct TV broadcasts to the pledges of his ministers that everything was fine, while at the same time dozens of Greeks were burning. it is correct in one sentence, the Greeks are not losophagos, they will never forget it ".

As blue captains commented, Mr. Tsipras resorted to several unfortunate references to the Odyssey. "The symbolism of Ithaca is not right: the end of the route has not yet been reached Yesterday the cheap financing of the country ended, but today there are new heavy measures and heavy obligations signed by Mr. Tsipras, and that was because of the devastating first half of 2015 and the choice of the infamous Yiannis Varoufakis ".

Gennimata: Imagined to be the modern Odysseus

"Mr. Tsipras is supposed to be the modern Odysseus," said Mrs. Gennimata, adding, "However, a ruthless leader of power was brought to bear on high costs for Greece and the Greeks."

"He spoke today as a" day of redemption ", but the Greek people are paying the unbearable ransom," continued the PASOK president, adding: "The unnecessary and painful Memorandum of SYRIZA / ANEL has ended, but the problems are there, people ".

"Mr Tsipras' adventurers cost EUR 200 billion in 2015, led to new, tougher measures, permanent caretakers, the blowing up of public debt, a detour in the neck of the Greek people, Greeks and Greeks forgetting divisions and client logic, status, populism, demagoguery, false promises, cynicism and inhumanity not even today he did not hesitate to indulge in a preaching of hatred and division, as here, apologizing for the lost years and making unnecessary sacrifices, not to celebrate, "Mrs Gennimata concluded.

KKE: Here ships have been lost, boats are arming

"The popular saying" here ships have been lost, boats are arming ", the prime minister recalled the proclamation and tried to hide that the so-called" new era "is based on" decimation "of the rights of the people and youth," said KKE Secretary General Dimitris Koutsoubas.

"The government is not obliged to either lift a measure imposed on the people by memoranda – on the contrary, it is bound in all respects that the restructuring will continue and that people will have to forget everything they have lost and compromise with what crumbs, "noted the SG of the KKE

The Prime Minister's visit to Ithaca is emphasized by the government's obsession with communication. Alexis Tsipras, Dimitris Tzanakopoulos and the rest of Maximos Maximus were finally tempted to set up a festive setting, despite the fresh memories of the tragedy in Mati.

The background to the decision is of particular importance, as the prime minister and close associates have not confirmed leaks for the election of Ithaca until late Monday. Valid sources say that even the mayor of the island was not aware of the transition, while Kefalonia MP Aphrodite Theoppektou, who accompanied the prime minister to Ithaca, was also caught in the bedroom.

Information suggests that the choice of filming – rather than direct broadcasting – hides the fear of Alexis Tsipras for sardam, while it seems that more than one shot was needed for the end result.

However, the tactical mystery of the government is not new. With a surprise and incomplete briefing – sometimes misunderstood – for the simple moves of the prime minister, the Maximus Mansion runs from 2015. A recent example, the "celebration" of the agreement with Skopje, where they kept the location and location hidden day of signing in Prespa. As a resourceful Odysseus of communication, the prime minister chose to stay hidden until the last moment.

The news of Ithaca was, however, unofficially leaked, so that the political controversy sprang up, with the main aim of disorienting the criticism of reality, which is no longer the supervision of the next day. The last announcement of Alexis Tsipras' "visit" was on Tuesday morning with a laconical announcement from the Prime Minister's press service: "Prime Minister Alexis Tsipras is going to visit Ithaca today".

At the meetings of the office of the Prime Minister in Herodes Atticus, the proposal was therefore that Alexis Tsipras would go to Ithaca as an alternative to the planned party, which was canceled because of the fire in Mati. The suggestions had to be outside the Maxi, because it was considered as an opportunity to write a story about the sea as the other side of the same medal of adventure, that is Kastellorizo. Not associated with George Papandreou and access to the Memoranda, but with Alexis Tsipras, who symbolizes the modern hero.

The main axis of the board of SYRIZANEL is therefore communication, hence the promulgator, to give a symbolic character to the Presidential elections of the president of SYRIZA. The use of the words from Homer's Odyssey meant the appearance of the same savior who led the country to Ithaca and sent the election efforts, which regarded the markets as the Greek stock market. Alexis Tsipras gave a speech reminding the party leader that he clearly indicates how the election period will expire.