The Tsipra word from Ithaca: We have arrived at our destination 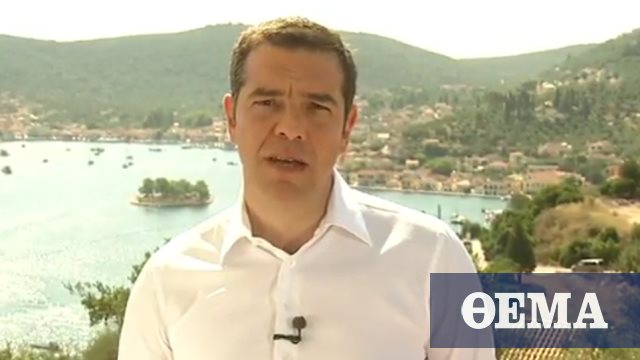 Historically, in his speech from Ithaca, Alexis Tsipras described the "decision of the Greek people to give the country leadership to new captains 3.5 years ago." "We have gone through many waves to reach our destination today," he said. "The memoranda of austerity and recession are finally coming to an end, we have left the comfits behind, Ithaca is just the beginning."

As the background of the port of Ithaca, the Prime Minister claimed that Greece has become a normal European country without other blackmail and other sacrifices.

From the reports of Alexis Tsipras, the peaks for the bankers who became prime ministers, also for the ministers who became bankers, as well as for the changes in the crew because they "frightened the waves".

He also commented: "We are well aware that we are not ready here" for "never returning to Greece from shortages and bankruptcy".

The whole proclamation of Alexis Tsipras:

"Today in our country there will be a new day.
A day historical. The notes of austerity, recession and social depopulation are finally coming to an end. Our country again has the right to determine this fortune and its future. As a normal European country. No external compulsions. Without any other extortion. Without other sacrifices from our people.

Our place is closed, the two blacks are closed, says the poet. We have left these supplements behind us. Knowing that Greece is its history. Achievements, struggles but also bruises. That is, they set their course in the course of the centuries.

A journey that was never easy. But it always had a destination. Even in the darkest days, in the larger animals.

Greece has seen its modern Odyssey since 2010. Within five years, unprecedented things happened for a country in peace. We lost 25% of our national wealth. 3 out of 10 were unemployed. 6 out of 10 young people too. Austerity measures of 65 billion were implemented. Violence and repression became part of daily life. Democracy was blessed. Bankers became prime ministers and ministers became bankers. Fascist gangs came out of their hiding places after 60 years.

A country in a permanent state of emergency. And a people who have never accepted the fate of the powerful. And he wrote new pages of resistance

These people, three and a half years ago, have made a historic decision. Getting the wheel from the land of those who led her to the rocks. And give it to new captains. We assume this heavy responsibility. With determination, determination and respect for the sacrifices of our people. We have not gone with certainty. Only one. What the Greeks and the Greeks defined us: to get the country out of the shortage of the memoranda and the endless austerity.

We have passed many waves to reach our destination today. The crew has changed. Others were afraid of the waves, others preferred to tame them. We have heard the sirens of futility many times. That things in Greece will not change. And the memoranda will be here forever.
That it does not make sense to resist if the Lasestygenes and Cyclops contradict you. The mud that small and weak Greece could not win.

None of these, however, supported our efforts. That is because the people who were forced to come to the destination were no longer on the sidelines. They were no longer locked up in the hold, no voice, no hope. But he was behind the wheel. With us. And it was difficult for them to keep it tight.

Today is a day of salvation. But it is also the beginning of a new era. And at this point of departure we will not rush to ignore the lessons of Greece on the memoranda. We do not let ourselves fall into oblivion. We will not be batchers.

– We will never forget the causes and the people who led the country to the memoranda.

Tax of great wealth,
generalized interweaving and corruption,
the shame of a number of business and publishing groups that considered years as their country,
cynicism and contempt of a political elite who thought Greece was a feud and its Greek-convinced citizens.

– We will never forget those who destroyed and devastated Greece and the Greeks because they did not dare agree to the realization of a neoliberal experiment that would last for decades.

But we will not forget those who were on the side of the Greeks and Greece in the difficult. People and political forces from all European countries. Strong opposition to the plans for Greece to close and punish. Because they know that Greece means much more than budgets for Europe.

We will not forget anything that we have experienced because it is not just something for the historians of the future. But it is the necessities of a country that is writing the new page of its history in the present time.

We arrived at our destination, we came from the memoranda, but we are fully aware that we are not finished here yet. New fights are now for us. Modern suitors are here and still face it. It is they who want to see the boat back to the sea and the people back to the hold. Those who, in their image and likeness, made Greece the corruption, the interdependence and the power of the few. Those who do not want to be disturbed by tax evasion, infringe on the public interest, have their off shore and their deposits abroad. Those who consider themselves as above any law and a rule of law. And they tremble for the idea of ​​independent justice.

We will not leave Ithaca in their hands. Now that we have reached our desired destination, we have the power to make our place as it deserves. The inventive Greeks, we wrote in the race and sacrificed the end of the memoranda. From today we start with vision and determination, for the new era of our country. With prudence and responsibility, never returned to Greece from shortages and bankruptcy. But also with boldness for the rebirth of Greece. For a homeland of equality, democracy and social justice.