With two scenarios for pensions the budget for 2019 – News – news

greece October 1, 2018 greece, Nation Comments Off on With two scenarios for pensions the budget for 2019 – News – news 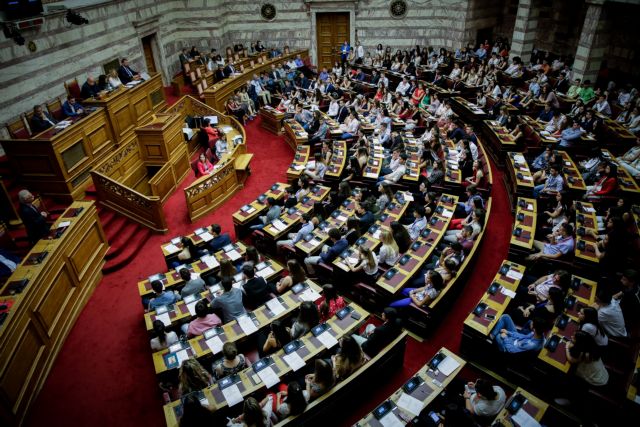 In a separate table (table 2.6) on page 32 of the preliminary draft budget, the government indicates that it intends not to implement the measure to reduce pensions in 2019 or the countermeasures it has approved.

The main argument is that even if the pensions are not reduced, the budget will close next year with a primary surplus of 3,8% of GDP (€ 7,319 billion), which is higher than the target of 3,5% of GDP. GDP.

However, in the draft budget in the base table (page 18), it is estimated that if the pensions were to be reduced as agreed, the primary surplus would be 8.8 billion or 4.4% of GDP.

In this way, the "trick" as described in "Sunday & # 39; s Step", the government wants to build up its argument that the new budget will come out without lowering pensions.

However, he expects the approval of Brussels, which is not expected to appear before the Eurogroup in December.

A strong argument in this direction, not to reduce pensions, is that in 2018 the budget for the third consecutive year ends with a primary surplus of 7,043 billion euros or 3.8% of GDP.

MONEY: "Our intention not to reduce pensions"

"The draft budget of the state reflects the government's intention not to implement the pension and balancing interventions, as they were included in the medium-term framework for 2019-2022, with the exception of the measure supporting family benefits, which has been in force since 1.1.2018 ".

This is emphasized by the Ministry of Finance and emphasizes the following:

According to the estimates of the draft of the state budget, both the fiscal expansion measures described and the non-execution of pension and balancing interventions are fully compatible with the country's budgetary objective as laid down in the medium-term financial framework for the financial strategy 2019-2022 . "

Minister of Finance Euclid Tsakalotos is in the Eurogroup where he will inform his counterparts, although the Greek budget is not on the agenda of the Council.

"The Treasury Department today submitted to the Standing Committee on Economic Affairs a draft draft of the national budget for the year 2019.

The draft state budget is based on a revised macroeconomic scenario where the growth in fixed interest rates is expected to be respectively 2.1% and 2.5% for 2018 and 2019 respectively.

Satisfactory budgetary performance in the years 2015-2018 and the improvement of the macroeconomic size of the Greek economy allow for a gradual change in the mix of fiscal policies to increase disposable household income, support for sustainable development and targeted, chronic deficits in the area of ​​social protection.

For 2019, the change in the fiscal policy mix will be implemented by the following measures that the government intends to implement:

• On the expenditure side, (a) subsidizing social security contributions for young people under the age of 25, (b) introducing a new rent subsidy scheme based on economic and family criteria, (c) improving special education and training, (d) strengthening the & # 39; Home Help & # 39; program.

Tzanakopoulos: The government's intention not to lower pensions

Earlier, the government spokesperson, Dimitris Tzanakopoulos, said that the draft budget reflects the current fiscal environment, as well as the intention of the Greek government to continue fiscal interventions to prevent austerity.

The Minister of State emphasized that "we have already clearly indicated that the level of pension cuts is not necessary to reach the primary surplus target of 3.5%, provided that all countermeasures are not applied."

As it has been added, accurate quantification of the measures will be established in the context of the budgeting of all Member States of the European Union during the European Semester.

"The government's intention is not to introduce the standard for pension deficits," he added, adding that all necessary legislative interventions should be taken before the final vote on the budget.

Asked about possible elections if the attitude of the lenders is negative, he remarked: "There is very good consultation with the lenders, there is no reason for the government not to spend four years."