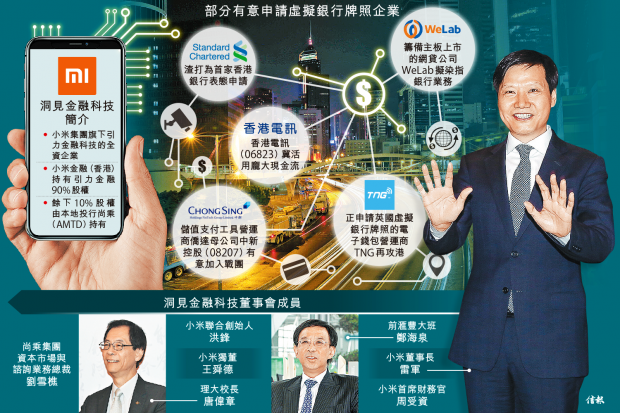 Since the introduction of virtual banking in Hong Kong by the HKMA, many banks, non-banking financial institutions and even internet technology companies have indicated that they are interested in applying for a license. Among them, Xiaomi Group (01810), the first listed company with various rights in Hong Kong, is actively planning to enter the virtual banking market. It is understood that Insight Fintech HK of Xiaomi Finance has invited the retired first HSBC Chinese Tai Zheng Zheng Haiquan and the current president of the Polytechnic University Tang Weizhang to become a member of the board of directors. The news showed that financial technology is interested in applying for a virtual banking license, hoping to submit the documents before the end of the first batch of applications by the end of this month.

Zheng Haiquan, former chairman of HSBC Asia Pacific, stopped in 2011 and is currently an independent director of large listed companies such as Changhe (00001), CLP (00002) and MTR (00066). According to the news, Xiaomi was able to get Zheng Haiquan into financial technology. The founder and chairman of Xiaomi Group, Lei Jun personally invited him to help Xiaomi Finance develop virtual banking with the rich experience of Zheng Haiquan in the banking sector. It is reported that Zheng Haiquan, 70, has joined the company as a director of financial technology after having considered it.

Tang Weizhang joined the Insights Board of Directors

In addition, the current president of PolyU Tang Weizhang just joined the board of directors of Financial Technology. Tang Weizhang has actively promoted innovation and development in the near future, including the promotion of the Dawan District International Innovation Institute, jointly set up by Polytechnic University and Shenzhen University in Futian District, Shenzhen.

Insights into financial technology also have a number of directors with experience in the banking and technology industries, including Lei Jun is personally in charge and there are former chief executives of the HKMA in New York and former executives of the US Department of Commerce. Finance, as well as current incumbents. Liu Xueyu, president of Shangcheng Group Capital Markets and Consulting Business, former vice president of finance of Alibaba, current Wang Xiaode, Xiaomi Independent Director, Xiaomi Chief Financial Officer Zhou and Xiaofeng co-founder Hong Feng.

The virtual banking licenses of Hong Kong have attracted many Internet companies on the mainland to do their best. Besides partnerships with local companies to apply for licenses, they will also recruit senior bankers in Hong Kong to be able to contact the HKMA in the future. to make. Virtual banking on the market. In addition to Zheng Haiquan's participation in the virtual banking activities of Xiaomi there are reports that Zhongan Online (06060), Beststar (01168) and China CITIC Bank (International) have set up a joint venture, "Zhongan Virtual Finance", which also success is invited. Former Hang Seng (00011) Tai Ban Ke Qinghui was appointed as a director.