What Rupee decline means for business fundraising in 2018-19 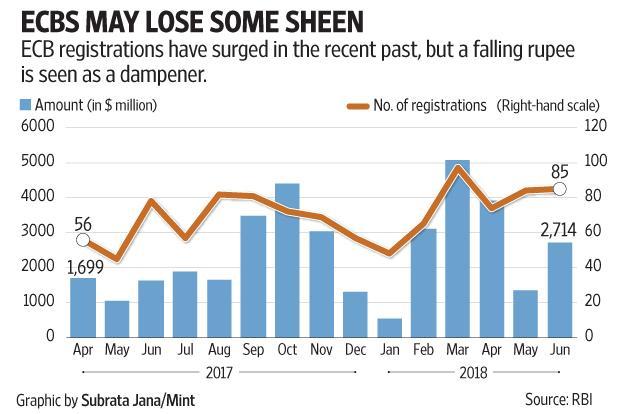 In 2018, the rupee has so far been submerged to nearly 10% and is currently trading at $ 70 against the dollar.

A depreciating rupee poses a risk for external commercial loans (ECB), a preferred way to raise money because the cost of borrowing is increasing. However, it can be good news for domestic lenders. Whether banks can sell their bad loans and take on the task is another matter.

The collection of money via the ECB route has emerged as a favorite mechanism for companies. Relatively lower interest rates and relaxation of ECB standards by the Reserve Bank of India made them an attractive fundraising option.

In the first three months of fiscal year 2019, total ECB registrations have increased significantly compared to the corresponding months of last year, according to data from the Reserve Bank of India.

The recent strong depreciation in the Indian currency, however, could play spoilsports. In this year, the rupee has so far been submerged almost 10% and is currently trading at $ 70 against the dollar.

As the rupee becomes weaker, hedging costs become higher, reducing the benefit of borrowing from a foreign market.

According to Anil Gupta, vice president, sector head of financial sector ratings, Icra Ltd, the 3-month term annualized hedging premium increased from 3.97% in April 2018 to 4.09% in May to 4.34% in June and 4 , 48% in July 2018. "Due to the depreciating rupee, hedging costs have increased over the last few months, which, in addition to a general rise in international interest rates, will increase the financing costs for Indian companies, so the Rupee-speaking ECB or Masala bond- Issuance can get a hit in the short term because currency risks on these bonds are borne by investors, "he said. A falling rupee will encourage companies to choose other channels to meet their cash requirements.

The traditional way to raise funds for Indian companies comes from banks, which are under pressure because of rising bad loans. Corporate bonds and commercial paper are some other alternatives to garner funds.

Madan Sabnavis, chief economist, Care Ratings Ltd, expects that India Inc. goes back to banks. "Bank credit has already become attractive because these rates are more sticky compared to, for example, the market where bond yields have risen with enthusiasm when the RBI raises interest rates. Banks can be the preferred path today, because the transmission of interest rate increases is slow," he said.

However, Gupta believes that, given the weak capital position of the public sector, the banking system may not be able to support high credit demand and that commercial paper is a short-term source of financing, its own limitations generally have a company's borrowing mix. . "As per RBI data, as in July, commercial paper volumes rose 96% year-on-year and this strong volume increase is not sustainable, so we expect part of the commercial paper loans to shift to bonds, which will result in a higher issuance of bonds during the second half of FY2019, "said Gupta.

In short, while ECBs may lose some steam in the short term, the weakening rupees and rising interest rates could stimulate demand in domestic sources.