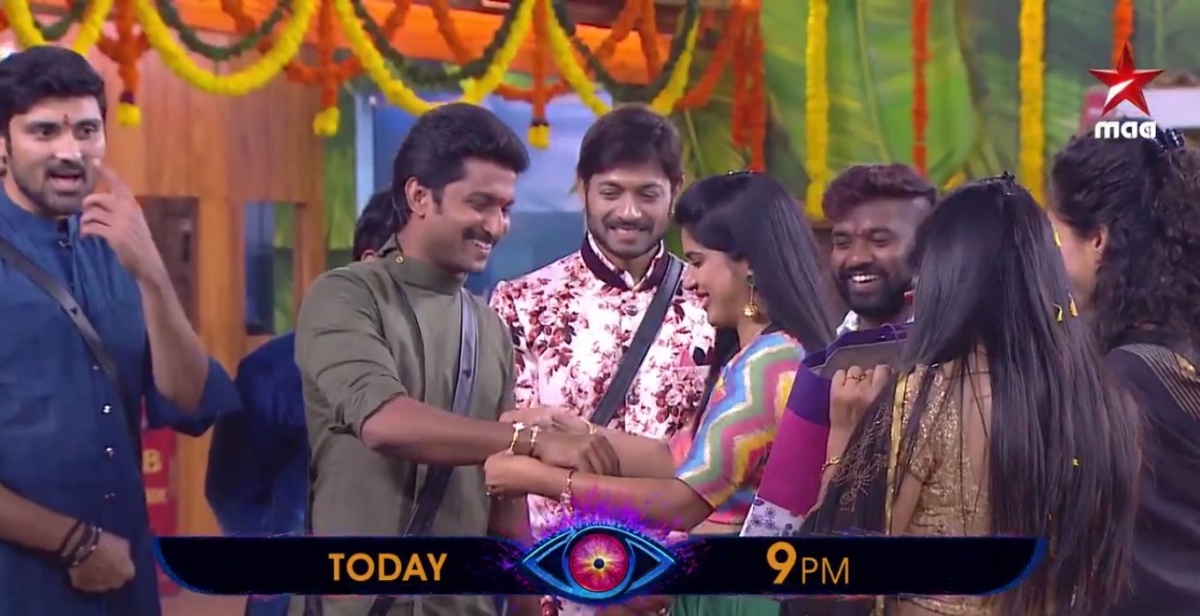 10.26 am: It is nominations time. Nani asks the nominated participants to stand aside. Nani announces that Kaushal, Tanish and Deepthi Nallamothu are announced as safe participants who escape the eliminations. Pooja Ramachandran has been eliminated from Bigg Boss Telugu 2.

10.14 am: Nani terms Pooja Ramachandran as one of the strongest people in Bigg Boss Telugu 2. "It is because of Pooja that the other housemates have been so energetic," Nani told Pooja Ramachandran. Nani calls Shyamala an innocent lady, who after her comeback on the show came with a fresh energy. Ganesh gets a compliment that he has been a good participant, but he always needs an external push. Nani also talks in a witty way about his punch dialogues.

10.18 am: Kaushal is named by Nani as the most consistent player in Bigg Boss Telugu 2 house. Nani also calls Kaushal as a real and serious player. Nani indicates that Kaushal is one of the most popular participants of the audience.

10.10 am: Nani expresses that Samrat is a kind of person who can not injure anyone. Tanish is mentioned as a preacher who does not follow. Deepthi Nallamothu receives a compliment that she is a trusted member in Bigg Boss Telugu 2 house. Nani indicates that Geetha Madhuri had earned a lot of respect after she stood up for Kaushal during one of the crucial moments in the show.

10.05 am: Nani tries to explain things about his career, referring to his journey until he seized the offer to host Bigg Boss Telugu 2. Nani starts talking to each member in person. Nani talks about Nutan Naidu and tells that his trip to Bigg Boss Telugu 2 show was a mysterious one. Roll Rida is referred to by Nani as an on-off participant. He says that Roll has been a favorite for all roommates. Amit is mentioned as an entirely different person and Nani even indicates that his behavior was confusing.

22.00: Nani plays the teaser of his upcoming multistar film Devadas. Bigg Boss Telugu 2 participants see him cheering and wish the Devadas team the very best. Nani asks the housemates to come together to discuss the game now.

9.55 pm: Nani is having a conversation with the housemates. Nani promises the roommates that they will have a big party after the Bigg Boss Telugu 2 show has been completed. "Someone takes the initiative and makes arrangements for the party, no egos, no other problems, we will party hard that day", Nani says to the housemates. Nani has a warm conversation with them and shares some things about his mother and family. He ensures that participants get a chance to see the special show of his upcoming film & # 39; Devadas & # 39; starring Nagarjuna.

21.50: Nani brings food to the Bigg Boss Telugu 2 roommates. He serves the food to all roommates and then shares the food with them.

9.45 pm: Nani continues to show the memes shown to the housemates. The memes are just so entertaining and funny.

Geetha Madhuri, Samrat, Tanish, Roll Rida, Nutan Naidu and all others are seen enjoying the memes.

9.30 pm: Nani says the teammates will see some exclusive memes from the audience.

The roommates are laughed out loud aloud to look at those memes. Samrat & # 39; s memes appeared as screeching jokes for the roommates.

9.22 am: Bigg Boss Telugu 2 roommates send goodies from their loved ones. Deepthi Nallamothu, Shyamala, Geetha Madhuri receive gifts from their brothers and sisters and loved ones as the Rakshabandhan gifts.

21.15 pm: the Rakshabandhan parties are still in Bigg Boss Telugu 2 and the teammates are enjoying it.

Nani then reads the personal messages that the roommates have received from their brothers and sisters in the context of Rakshabandhan.

Samrat, Roll Rida, Kaushal, Tanish, Amit and the other teammates receive messages from their loved ones.

9.10 pm: The women in Bigg Boss Telugu 2 house tie Rakhis to Nani and Nani presents them a few gifts in return.

Nani has seen what special things are sharing, regarding his relationship with his sister. All teammates are very pleased with the presence of Nani.

Deepthi Nallamothu gets her captain back when Nani asks for her support.

While the Bigg Boss Telugu 2 promo opens, hostess Nani sees the house with a few gifts and sweets in his hands. All housemates love to see him in the house. Amit Tiwari, Tanish and others hug him and warmly welcome him. The host is seen as revealing that he has entered the house to celebrate Raksha Bandhan.

Later, Deepthi and Shyamala are seen by tying rakhi to Nani's wrist, sharing sweets and wishes with them. The host is seen with a special screening of a number of memes about the participant who do laps on the social media. The promo ends with a cheerful note, because all roommates enjoy this performance with a lot of cheers.

Deepthi Nallamothu, Pooja Ramachandran, Kaushal and Tanish were nominated for expulsion of Bigg Boss Telugu 2 in the 11thth week. Nani spoke to the roommates on Saturday, but he did not make anyone safe. He is ready to send one of the four nominated housemates out of the house.

Stay on this page, because we bring you live updates from Bigg Boss Telugu 2 from 9 pm onwards.