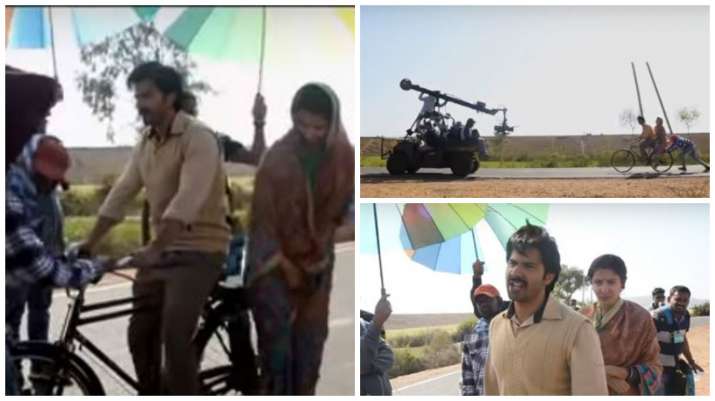 Varun Dhawan and Anushka Sharma are preparing for the release of their upcoming film Sui Dhaaga: Made In India. While Varun will play the character of Mauji, Anushka will set up his wife Mamta. Both actors were thawed for their roles. While Varun wore a mustache for the film, Anushka always had to wear a sari with pallu on her head.

Produced by Yash Raj Films and directed by Sharat Katariya, the film is about self-reliance. The production house ensures that the buzz about the film stays alive by dropping small clips behind the scenes. In the latest video entitled Mauji and Mamta's bike ride, we get a glimpse of the tiresome series.

Varun is riding a bicycle with Anushka carriage. Varun says that they shot in Madhya Pradesh during the burning heat of the summers and that he drove 10 hours on the bike. Both actors were tanned, yet they continued to shoot. Anushka had to be twisted with crossed legs. She even had to make sure that Varun was not held during the ride. This caused her back pain.

A related note is that Varun also occurs in Takht of Karan Johar, which plays in the Mughal era. Anushka will then be shown in Aanand L Rai & # 39; s Zero, with Shah Rukh Khan in the lead.