Lung disease: Pulmonary diseases increase by 46% in UP since & # 39; 90, claim research Lucknow news

LUCKNOW: The prevalence of chronic obstructive pulmonary disease (COPD) in Uttar Pradesh has increased by more than 46% since 1990, according to the assessment of data published in a Lancet study.

The study was titled & # 39; The burden of chronic respiratory disease and their heterogeneity in the United States of India: The Global Burden of Disease Study 1990-2016 & # 39; 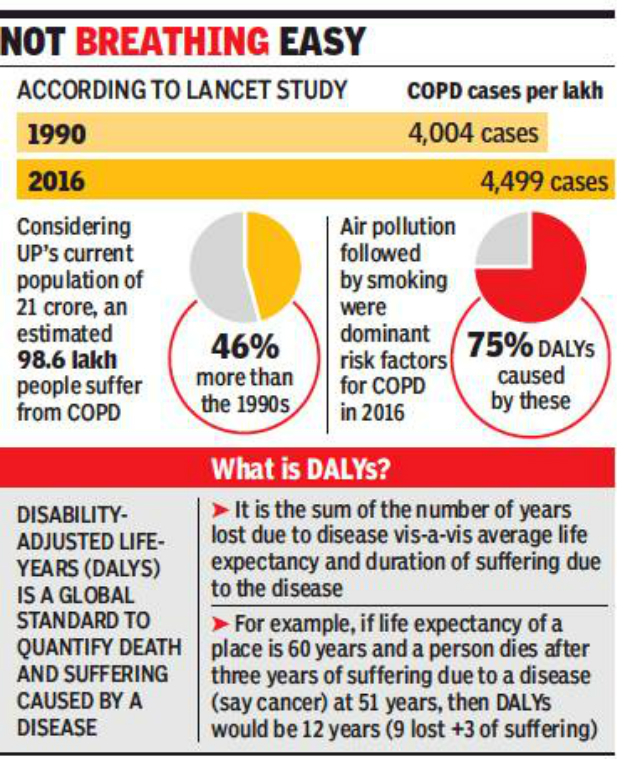 Against an estimated burden of 52 lakh COPD cases in the 1990s, UP is home to 98.6 COPD patients with lacquer hormone COPD. The newspaper reported that after Rajasthan UP was responsible for the highest burden of COPD among Indian states.

The study also showed that UP and Rajasthan were responsible for the highest mortality and disability-adjusted life years (DALY) due to asthma. A 2017 study by the Population Health Foundation of India showed that COPD was the leading cause of death in Uttar Pradesh. The Lancet study pointed out that the main risk factor for COPD in India in 2016 was air pollution, which bore more than half of the DALY's due to COPD. This was followed by smoking, which contributed a quarter for COPD DALYs in 2016.

Expert lung diseases and former director of the Patel Chest Institute in New Delhi, Prof Rajendra Prasad, stated that small dust particles in the air could cause COPD.

"Against a daily requirement of 2 kg of food and 3 liters of water, an adult inhales and breathes about 8 liters of air every minute, of which only 20% is oxygen." Pollutants affect the quality of lung function, paving the way for disease "he explained. The study also showed that a high number of COPD cases is due to relatively late diagnosis and management, even with improvement of health care in India.

There are indications that COPD is under-diagnosed in India, partly because the diagnosis is usually based on symptoms instead of spirometry (test for diagnosis). In addition, symptomatic people are often late in seeking care because of insufficient awareness of COPD