The attackers of Umar Khalid demand responsibility on Facebook 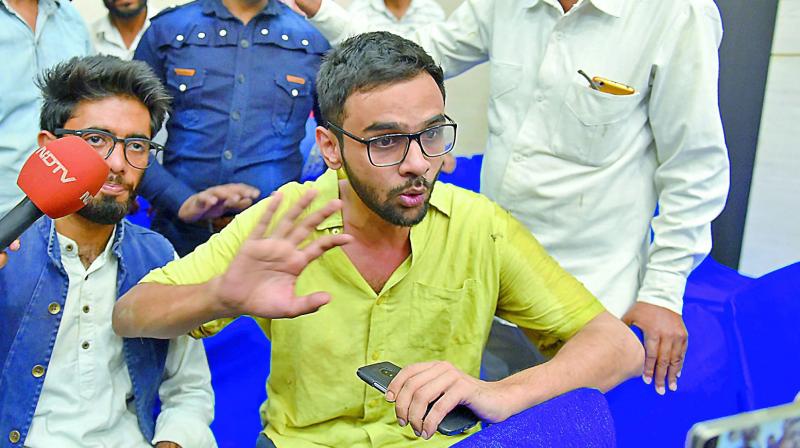 New Delhi : In a video uploaded on social media, two men claimed responsibility for assaulting JNU student leader Umar Khalid in an upmarket district in Delhi on Monday, saying they were will surrender for the police on Friday.

The police are looking for the two men who can be seen in the video uploaded on Facebook on Wednesday.

In the video, the two men, who identified themselves as Darwesh Shahpur and Naveen Dalal, claimed that the attack was an "Independence Day gift" for Indians. The police check the authenticity of the video and try to trace the IP address from which it is uploaded.

"We respect our constitution, but there is no provision in our constitution to punish crazy dogs." JNU gang that makes the country weaker and their number is increasing Our elders in Haryana have taught us that such people need to learn a lesson "said Shahpur in the video message.

The duo asked the police not to bother anyone and said they would surrender to the village of Sikh revolutionary Kartar Singh Sarabha on 17 August. They said they attacked Khalid for their country.

The police contact their counterparts in Punjab and Haryana to trace the two men.

Khalid was on Monday when he was on his way to participate in an event in the Constitution Club after he had taken tea at a store outside the venue. However, he escaped unharmedness.

On Tuesday, the Delhi Police handed over the case to his special cell, which has already been investigating an uproar against Khalid and two other JNU students.

The police had said they did not "suggest" about the event on Monday in which Khalid participated.

A policeman, known from the probe, said the police had seized the weapon and the preliminary forensic investigation suggested that the gun was stuck when it was used against Khalid. He said they still had to check if shots were fired because no empty cartridges were found at that time.

A case of attempted murder was recorded by the police.