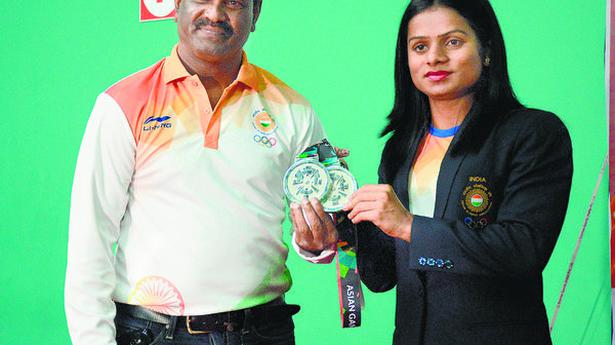 Struggling to control tears, Dutee Chand sprinted for the last three years of her emotional journey from banning the IAAF on hyperandrogenism issue to winning two silver in the running Asian Games.

"First of all, I want to start by thanking Ramesh sir (SAI athletic coach N. Ramesh) and Gopi sir (chief national badminton coach P. Gopi Chand), but for them I would be faded," says Dutee on returning to the Gopi Academy of the Asian Games on Saturday.

"Those were the days I just had Rs 500 in my bank account, not sure where to train after the IAAF ban, then it was Ramesh, sir, who made sure I was placed in the Gopi Academy on January 5, 2015." said Dutee.

"For me these two silver (100m and 200m) in the Jakarta Asiad are the biggest things in my life, I won many medals at national and Asian level, but these two are separate for the joy they give me, given the traumatic phase that I went through when the ban came up, "Dutee said.

"I also qualified for the 2014 Asiad, but had to be shut out because of the controversy about hyperandrogenism, and then I wondered if I would be back on the job, but now I'm here with a sense of pride," she said.

"I am also grateful to Gopi's mother (Subbaravamma) who treated me as her own daughter, and when I had problems eating, she gave me the freedom to cook for myself, which was very useful to me," she said. .

"I would also like to sincerely thank my government (Odisha), the sports authority of India, all support staff and all badminton players at the academy for supporting my cause," she said.

Sharath of the Mythra Foundation-Gopichand Foundation MFGF presented checks of Rs. 5 lakhs each to Dutee and Ramesh.