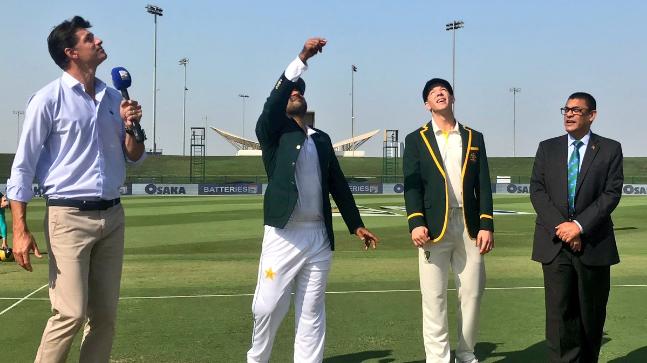 12:11 IST: 7.4: P Siddle to Ali, left on length and height this. This is almost about the stump. It is almost good in length. It squeezes sharply and just goes on top of the pole. Exit again.

12:09 IST: 7.2: P Siddle to Ali, Close! He came back and almost kissed the tree stump before he went into Paine's mittens. You can now say good leave, but that was close.

12:08 IST: 7.1: P Siddle to Ali, Good resilience and offer here. Siddle keeps it slightly shorter than a good length just outside. Azhar does not flirt with it.

12:07 IST: 6.6: M Starc to Zaman, some chin music for the batsman, the left-hander passes that bouncer to Paine.

12:06 IST: 6.5: M Starc to Zaman, Ill-directed bouncer! Starc takes this short but gets his corner completely wrong when he strays the leg. Paine does well to go right quickly to pack it.

12:05 IST: 6.3: M Starc to Zaman, very full, almost a yorker. Digging out with a straight bat by Zaman. Good pace is generated by the left fast.

12:02 IST: 5.6: P Siddle to Ali, who lands a bit shorter from a length a bit outside. Azhar looks again to block the front foot, but takes the inner half of the bat to the square leg.

12:01 IST: 5.3: P Siddle to Ali, Binnenrand on his path and on the ground. Azhar shoots forward on this good length ball. It lands and squeezes in again to get the inside edge. Touches his pads before he rolls to the covers.

12:00 IST: 5.1: P Siddle to Ali, Good length ball in the corridor around the post, comes forward in a solid defense.

11:57 IST: 4.4: M Starc to Zaman, A bit shorter of a good length that bobbles in Zaman, the left-hander seems to fike but is missing to hit the paddy.

11:57 IST: 4.3: M Starc to Zaman, a bit wide of this. Zaman seems to be playing carefully again but is again beaten by the tempo and extra bounce.

11:56 IST: 4.2: M Starc to Zaman, FOUR BYES! She roams way down leg and soars as well, Paine tries to grab it by diving to his right but scans and awards a limit.

11:55 IST: 4.1: M Starc to Zaman, defeated! Peach from Starc to transfer the new one. Really good to continue. Zaman is a bit loose. At a considerable distance just outside the stands Zaman did not have to play, but he still tried to get a club. The ball started and knocked on the outskirts of Zaman.

11:54 IST: 3.6: P Siddle to Ali, not out! Large inside of it. Bad review to be honest. Siddle comes in steaming and lands it on a length just outside, Azhar Ali is half forward defended and the ball hits the front path. Loud scream that has been rejected. It is taken up after a short chat when Siddle feels that the batsman is out. Paine responds and signals the & # 39; T & # 39; With replays, however, it is shown that there is an inner edge. So a good decision from the referee.

11:53 IST: The DRS has been taken quickly. It is for an Ibrahim decision against Azhar Ali. Siddle thinks he has his husband. Inner edge with the naked eye. Let's see…

11:50 IST: 3.1: P Siddle to Zaman, Attacks the stumps by filling him, Zaman defends him again on the track.

11:48 IST: 2.6: M Starc to Hafeez, OUT! That's just fixed! Wow. What a catch. Fantastic things from Marnus Labuschagne. Australia is catching up early. Starc bowls this completely on the pads, Hafeez moves it airy and it is hit hard. Labuschagne, which is positioned there, reacts quickly when the ball is hit against him. It bounces off his right knee, then goes from the inside of his left knee and he manages to swallow it to fall before the ball hits the ground. Repeats confirm the same. Very well done.

11:46 IST: Mohammad Hafeez has been caught. Marnus Labuschagne has taken a brief look at short legs of the appearance. The referee wants to be sure that if he is neatly cleaned up, he is brought upstairs. The soft signal is off.

11:43 IST: The physio is looking for Hafeez. It does not seem to look at the thumb, which is a good sign. His shoulder is the issue, which certainly hurts. The magic spray is out and it is being treated. It should be good to continue with the appearance.

11:42 IST: 2.4: M Starc to Hafeez, Scorcher! A scorching episode of Mitchell Starc as he pony and pony it briefly. Take Hafeez by surprise who was expecting a full ball. He goes back, can not play against it and it hits him on the right shoulder, after he has brushed his thumb.

11:40 IST: 2.2: M Starc to Hafeez, FOUR! Not at all under control, but he gets a limit for it. Hafeez pops away from a back of a length all around, taking it from the outer half and along the diving trench track to find the fence.

11:39 IST: 2.1: M Starc to Hafeez, Loose from Hafeez. Short and broad, yielding nothing, Hafeez should have left it, but he goes after it and almost chases it.

11:37 IST: 1.5: P Siddle to Zaman, A little form back from Siddle when the land lands on the middle and on the ground, Zaman is doing hard and drives it halfway.

11:37 IST: 1.4: P Siddle to Zaman, sagging from the outside, no shot offered from the left-handed arrow.

11:36 IST: 1.2: P Siddle to Zaman, from the inner half. Zaman seems to be driving this full delivery but only manages to avoid the left of the bowler.

11:35 IST: Peter Siddle will share the new ball with Starc. He has two slippers and a trench in place.

11:34 IST: 0.6: M Starc to Hafeez, Full delivery pretty close to, inbound, Hafeez comes forward and the half-ride returns from the inner half along the track.

11:33 IST: 0.4: M Starc to Hafeez, Good line and go well. Starc lands it outside on a fuller length and the zipper of the deck, Tim Paine behind the stumps collects it at a good height.