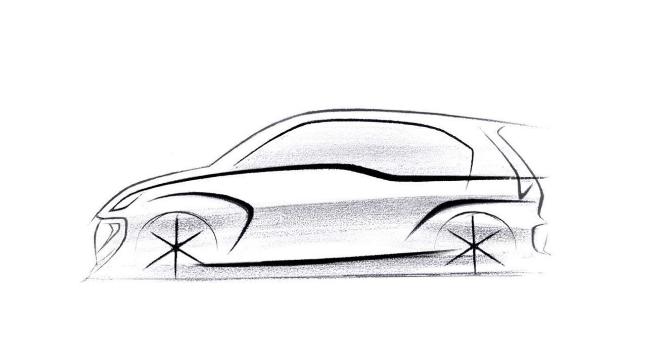 Hyundai launched in September 1998 its very first micro-part for the family on the Indian market, the Santro. The launch was a success when Hyundai worked overtime to deliver the cars to the customers. Now Hyundai de Santro has put back a while, but in the pipeline is a new one with code name AH2. The Korean car-major has released a sketch that puts the "Santro" in a new light.

De Santro will have the same target audience as before – families who want a comfortable car with a good brand value, and also the young crowd. The "Santro" will sit under the facelifted i10 Grande and will have a similar design language such as LED DRLs and the characteristic cascade grid.

In the interior, the upcoming Santro gets a three-spoke steering wheel with controls mounted on the sound. Hyundai has worked to make the all-new Santro more premium than before.

Under the hood Hyundai has not confirmed any specifications, but the intention is to be powered by an 800cc petrol engine. Hyundai is also expected to offer automatic / AMT versions for its micro-hatch. Also in line with the current models, the upcoming Santro will be delivered with airbags, ABS and an infotainment touch screen.