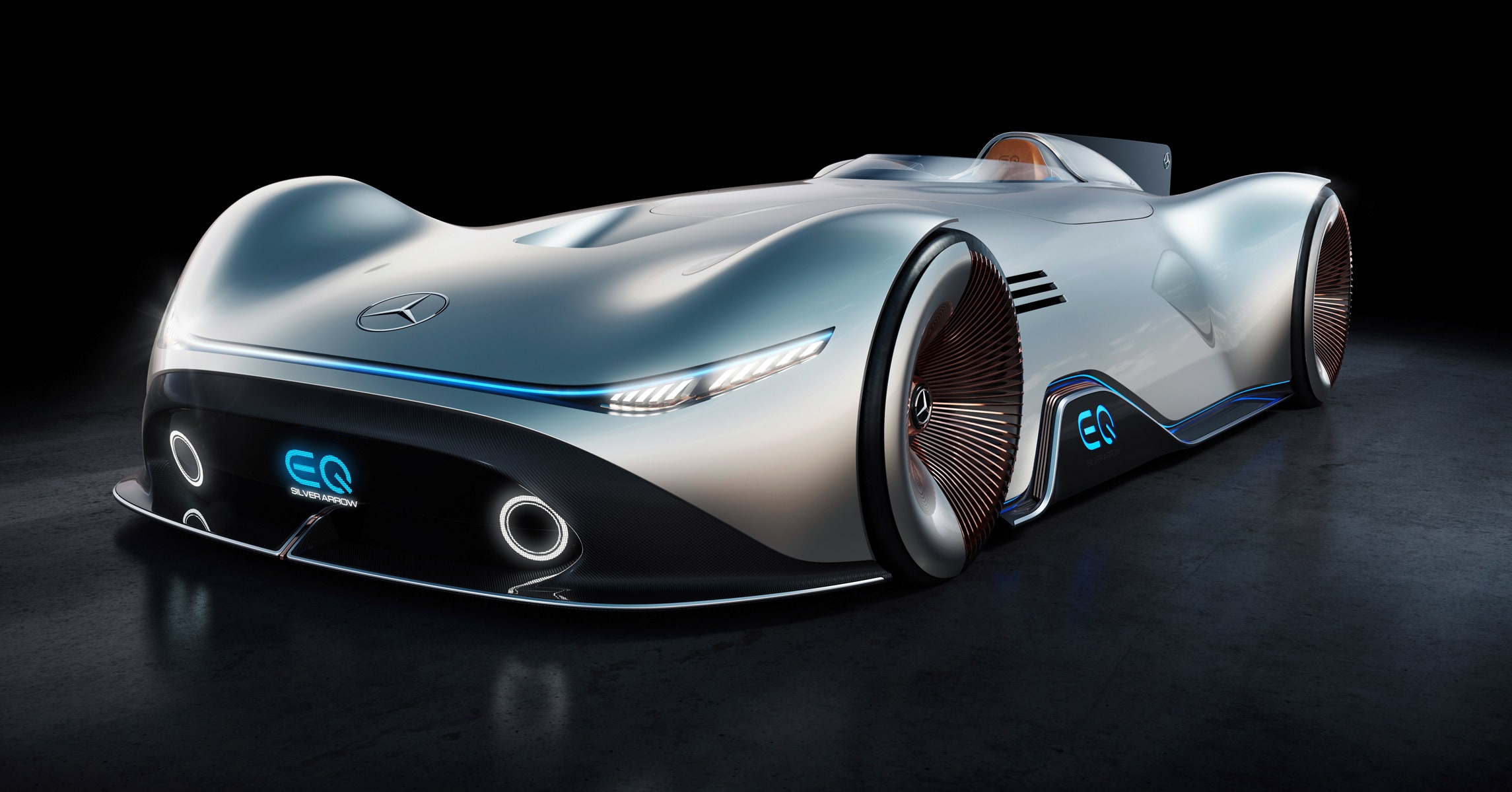 For all glory you get from driving in a Grand Prix racing car from the thirties, it is not the most comfortable way to travel through the city. There is a roof without a roof. The loud and (one can only assume) smelly engine. A chair that has not benefited from a century of ergonomic research.

So Mercedes-Benz has good news for those who love the bustle of the 21st century, but can not overcome the appeal of those pre-war days. During a swanky cocktail party on the Californian coast in the run-up to the Pebble Beach Competition d & # 39; Elegance of Sunday, the luxury automaker unveiled the EQ Silver Arrow, a concept that puts a high-tech twist on the car as it once was.

The Silver Arrow monniker dates from 1934, when Mercedes got disqualification from a race to show a kilogram above the limit with a car. To lower the weight, the team cleared the white paint from the W 25 racer and unveiled the shiny aluminum casing underneath. They won the race and the Silver Arrow name followed. This new concept is a tribute to the W 125 from 1937, which Mercedes driver Rudolf Caracciola won the European championship of that year, the forerunner of modern Formula 1 racing.

Like the racers of yesteryear, the EQ Silver Arrow accommodates only one, in the middle of the car, which is slightly more than 17 feet long and about three feet long. This is 2018, it is made of carbon fiber, so it is painted to look like aluminum. Each wheel has 168 lightweight aluminum spokes, painted in rose gold and has a non-spinning hubcap so that the three-pointed star is not exposed to the humiliation of turning.

You will find the same logo in the tread of the Pirelli tires and sewn into the seat, a detail that stands out even in a sea of ​​fine leather, aluminum, walnut and gray suede (matching the exterior). Other annoying features are the four-point belt (OK, that's just a safety object) and the "Airscarf" system that uses warm air to calm a driver's neck, so eager to hit the road, they forget their scarf in the penthouse to forget .

But the future is really in the drive line of the car. Instead of the 5.6 liter, eight-cylinder engine that drives the W 125, this concept gets an 80 kWh battery that produces the equivalent of a scandalous 750 horsepower and 250 mile range between recharges. Drivers who dig the battery empty but lack the auditory feeling of internal combustion, the (presumably luxurious) sound system can mimic a Mercedes-AMG V8 or a current Mercedes F1 car.

A large part of the view from the driver's seat is occupied by a panoramic screen that offers a three-dimensional view of the car's surroundings. If you're looking for a challenge, a ghost & # 39; competitor appears on the screen, an augmented reality trick that lets you race. And in order not to lose, the car's "Virtual Race Coach" gives tips in an indefinite way.

Of course, these are all but ideas; the EQ Silver Arrow is a concept and not the kind of thing that Mercedes is actually going to build. But at a time when the race to take control of the robot dominates the headlines, it's nice to watch the glory days of racing by people again, without risking a cold neck.

With the help of the "Virtual Race Coach" you can go on the track without worrying about turning this frown upside down. ||||